Stay Wild and Adventure On

Charlotte, North Carolina was named after Queen Charlotte of Mecklenburg-Strelitz, gaining it the nickname of Queen City. Not only in Charlotte named after a royal, but it’s one of the fastest growing cities in America, and for good reason! Our Uber driver that picked us up from the airport told us a whopping 70 families A DAY are moving to the Charlotte area. (Now I don’t know if that’s an accurate fact or not but felt cool enough to share!) After spending just a small amount of time there, you could tell that there were plenty of things to do for both the professional and the visitor. Here’s how to spend just one day in Charlotte and see it all!

Start your day right and head directly to Owen’s Bagel’s and Deli. Known for their steamed bagel sandwiches, they are shipped directly from the Bronx in New York and fresh baked daily. This was one of the most delicious bagel sandwiches I’ve ever tasted. And it’s a really cool little spot located in the South End! 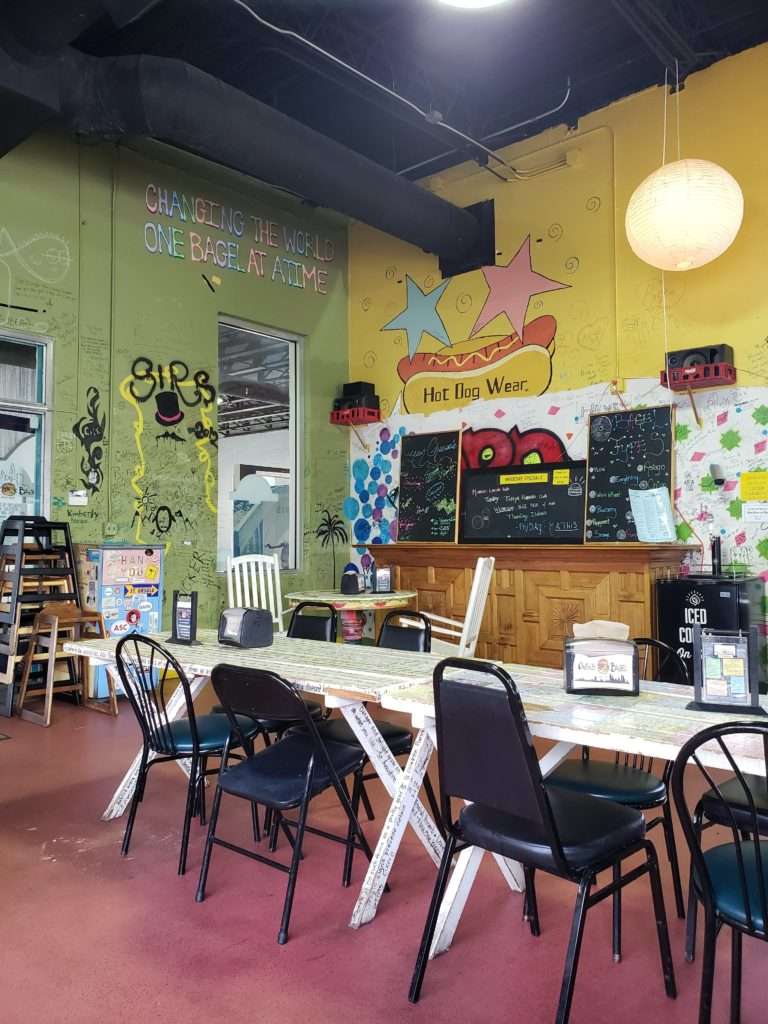 Pro Tip: Just don’t park in the parking lot of the strip club next door, they didn’t seem to like that very much!

If you’re looking for more of a brunch vibe, there are a million different restaurants with wonderful reviews and menus, so pretty much just google the nearest one and you probably won’t be disappointed!

Hop on one of the many scooters or bikes laying around the city and scope out some of the beautiful parks the city has to offer. My personal favorite that we stumbled on was the literary themed  park called The Green. The park is filled with book sculptures, quotes, author street signs, small little metal leaf accents and beautiful landscaping. It seemed that it drew a large lunch crowd of 9-5ers but was generally quiet and easy to explore. 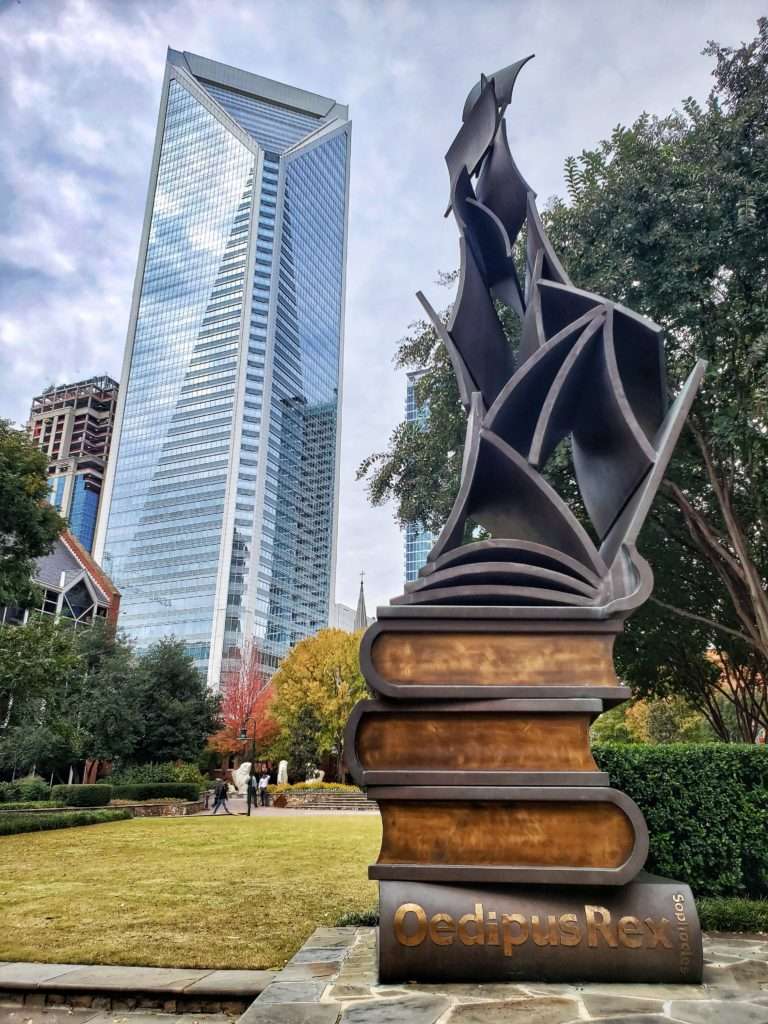 I also highly recommend Romare Bearden Park for the great perspective of the city behind a beautiful waterfall sculpture. Our only regret was not coming back at night to see the sculpture all lit up! 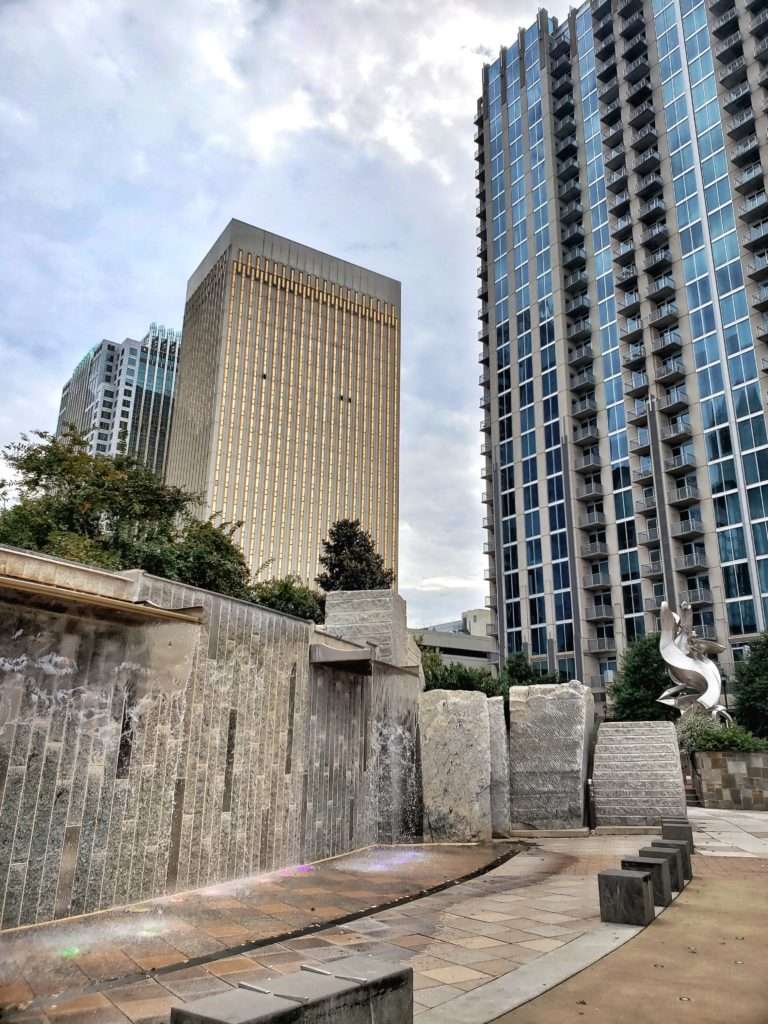 There is also a 4.5 mile walkway called the Charlotte Rail Trail that runs right through the city and connects many of the neighborhoods. This path will give you access to many of the great areas on foot or on a bicycle!

We stumbled on a little area known as Brevard Court in Uptown that I would classify as a bit of a hidden gem! Partially indoors and partially outside, this strip has restaurants and shopping ranging from ALL over the world. Vietnamese, Nordic, French, Irish, Greek, Cafes, Cupcakes, Pizza, Sandwiches, Burgers, you name it. Anything you want, you can probably find it there! 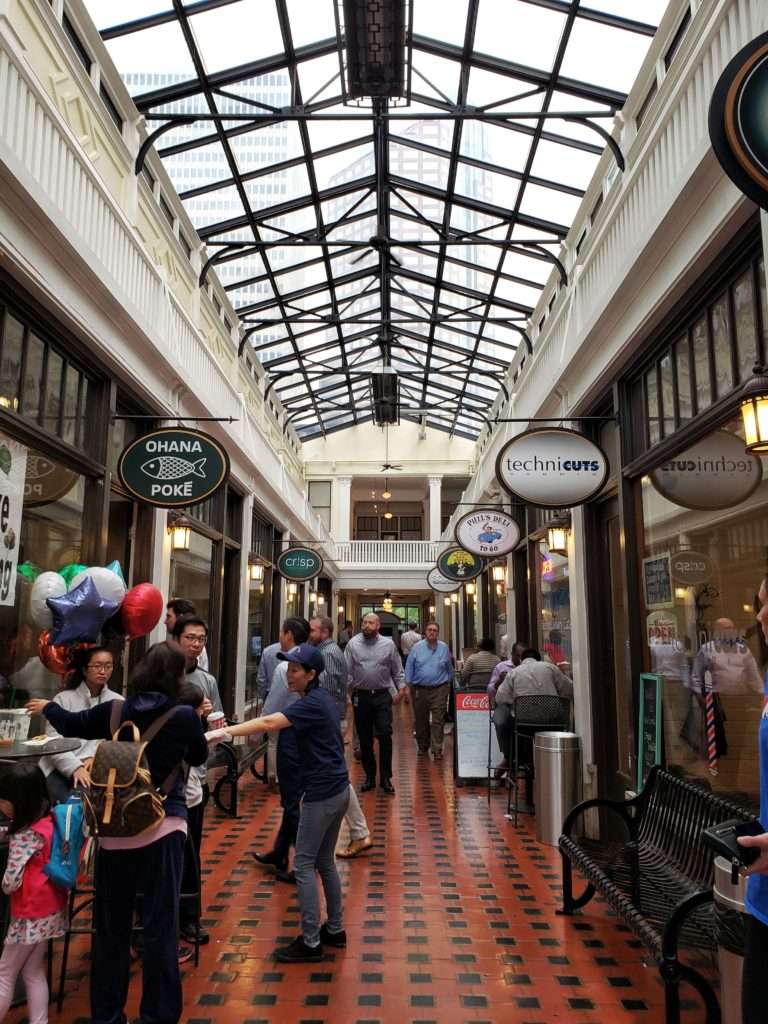 Another well known area is 7th Street Public Market, where you can find a variety of different food options and shops! Their website says that they aim to “promote local and regional farmers, food artisans and entrepreneurs.” Definitely worth the visit if you’re in the area!

Pop in to a Museum

The city has a great assortment of museums for you to explore. If you’re an art lover, spend some time in the Mint Museum or the Bechtler Museum of Modern Art, located right next to each other!

Just look for the mosaic Firebird sculpture out front! You can’t miss it! 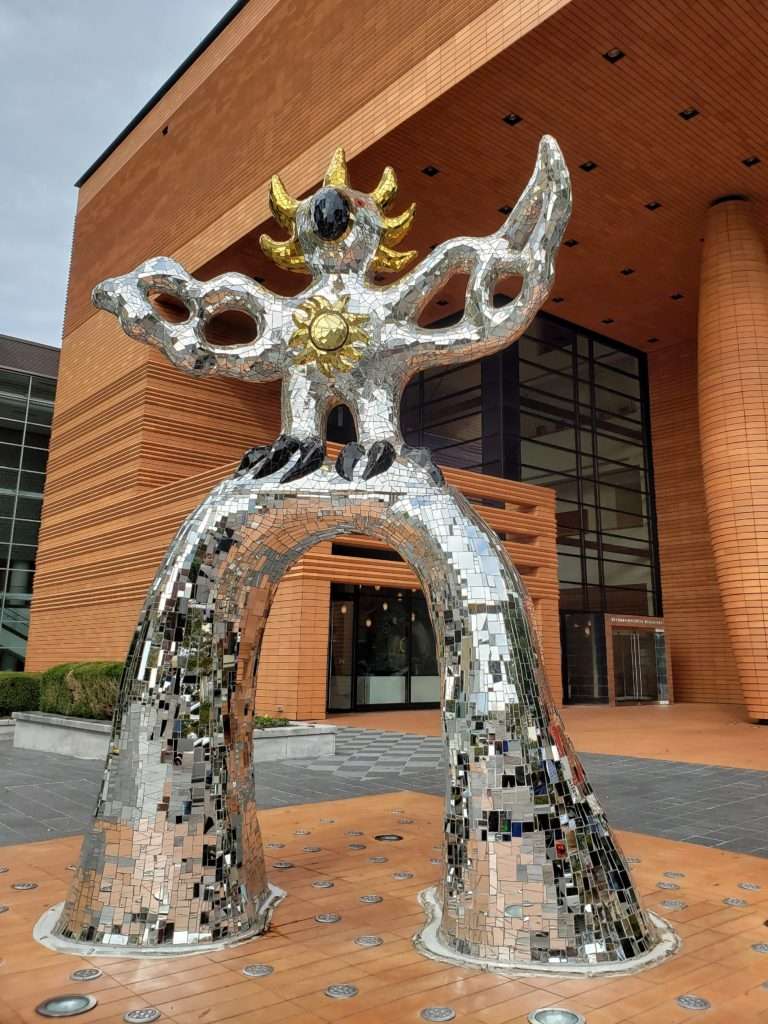 If art is not your thing, Charlotte is also home to the Carolinas Aviation Museum AND the NASCAR Hall of Fame Museum!

For more of a hands on experience for all ages, spend a few hours at the Discovery Place, immersing yourself in a variety of unique attractions.

Dinner with a View

The city skyline is beautiful and constantly changing an growing. I personally love to get a bird’s eye view of a city when I get there but sadly the weather didn’t cooperate with us while we were in Charlotte.

If you’re a bit luckier than we were with weather, there are a variety of different rooftop bars and restaurants to get a beautiful view! Farenheit, City Lights Rooftop, The Peculiar Rabbit and Whiskey Warehouse are just a few of the options I stumbled upon in my research!

Get your camera ready and enjoy the view!

The craft beer scene is booming everywhere and Charlotte is no exception! As of 2018, the city had 24 different breweries to explore! 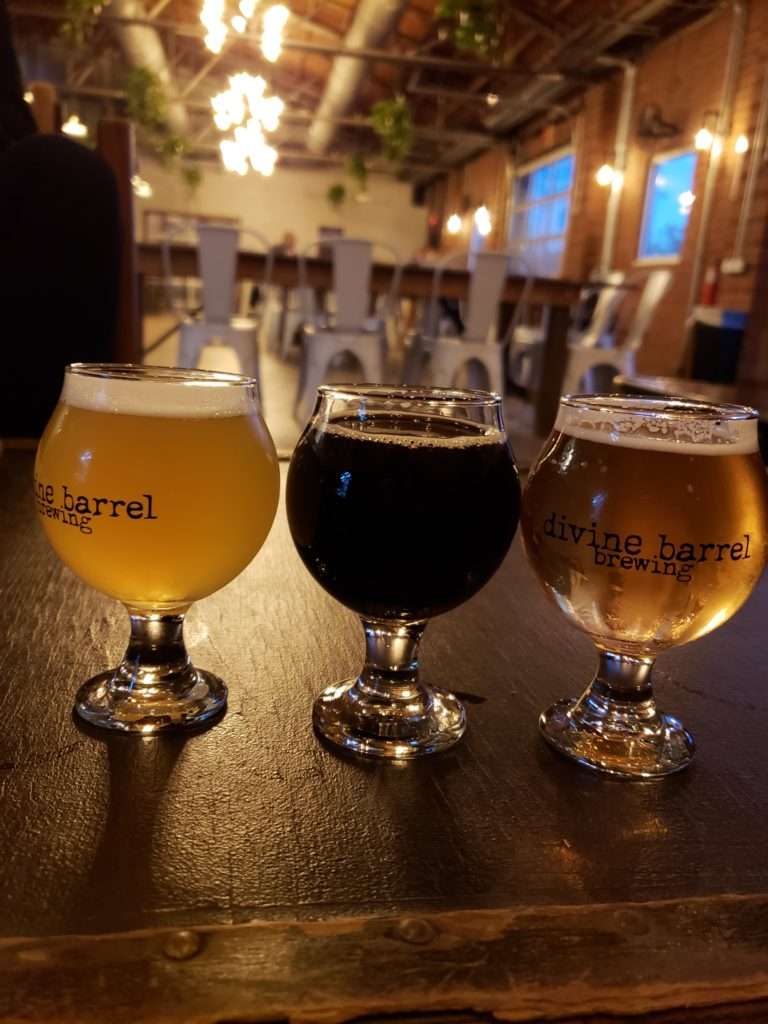 NoDa Brewing Company is a local favorite, with a variety of unique beer concoctions. My cousin raved of Sycamore Brewing‘s Friday night Beer Garden and food truck festivities, and Catawba Brewing Company just has rave reviews about everything they offer!

We spent some time at Divine Barrel Brewing Company, sampling the multitude of beer options, enjoying the ambiance of the plants hanging from the ceiling and watching all the dogs play! 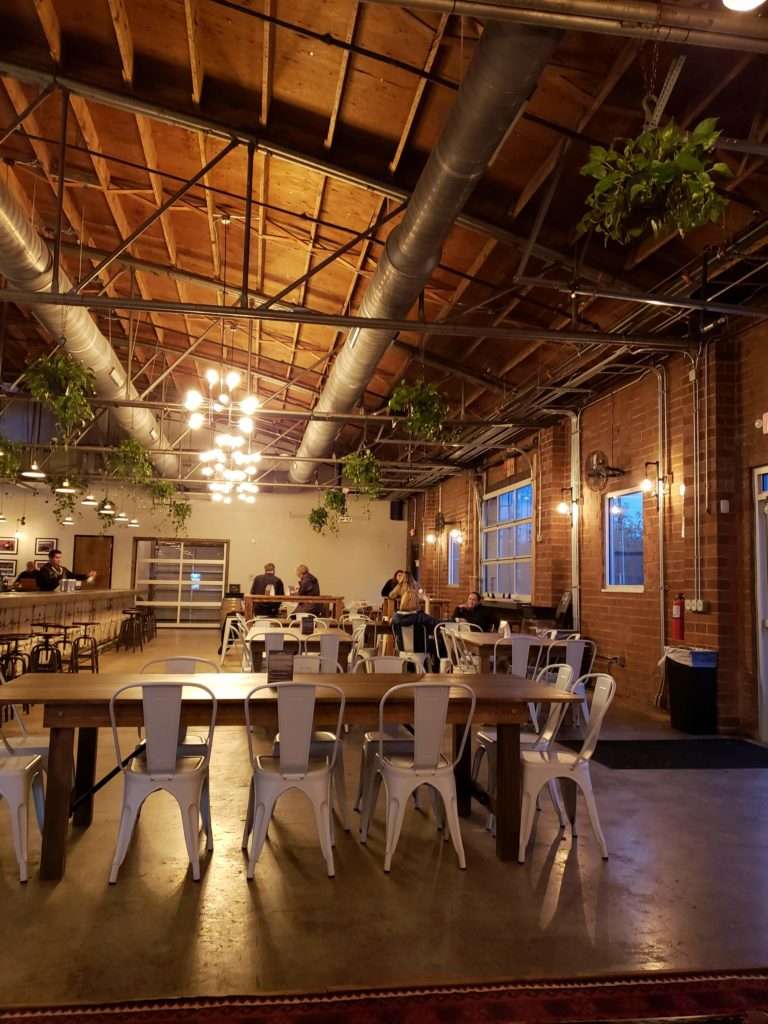 I don’t think you can go wrong with any of the breweries in the city!

Have you been to Charlotte yet? Have any can’t miss destinations to check out in the city? Leave your suggestion in the comments below! Until next time… 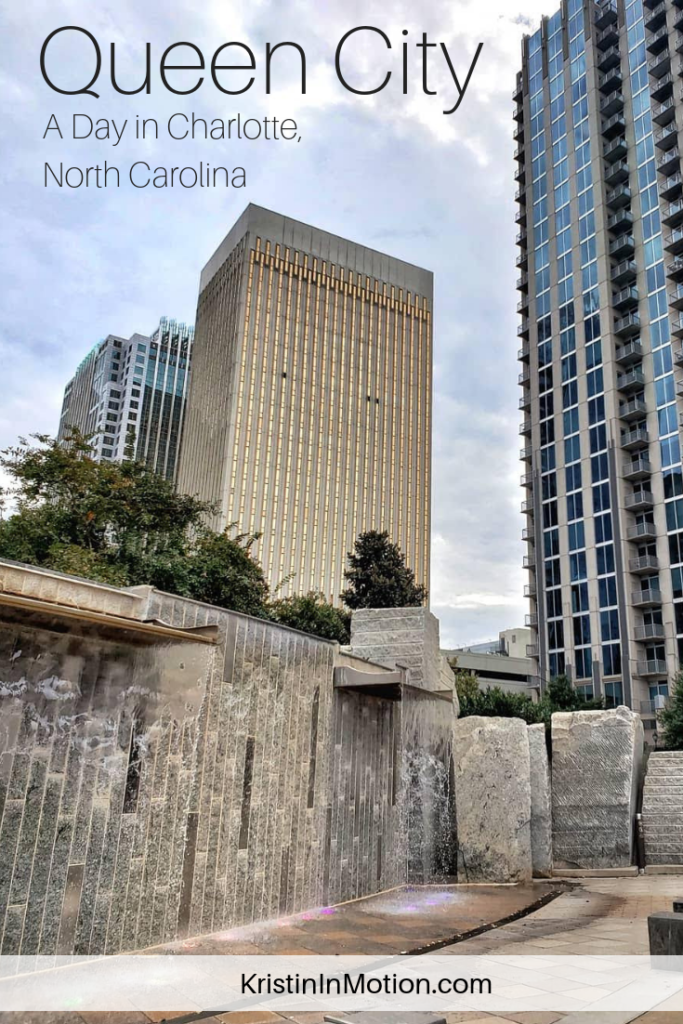