Time for another installment of my Adventure Diary series! My friend Brianna and I were looking for a way to break up the dull month of February so we decided to take a drive up to the The Finger Lakes in Upstate New York for a weekend!

This area is known for their 120+ wineries and gorgeous lake views, but what we didn’t realize was the magnitude of the Finger Lakes region! We had done a small amount of research and found the Cayuga Wine Trail as a map to follow. We learned very quickly that this was an amateur move and that we probably should have done a bit more research!

After an early morning start, we arrived to the region around 11am and dove into our first winery, Montezuma Winery and Hidden Marsh Distillery. Each tasting was surprisingly affordable ($5 for typically about 6 tastes of wine) and had a good variety to choose from between whites, reds and roses. To try an additional hard liquor from the distillery, it was only $1! Couldn’t pass that up! 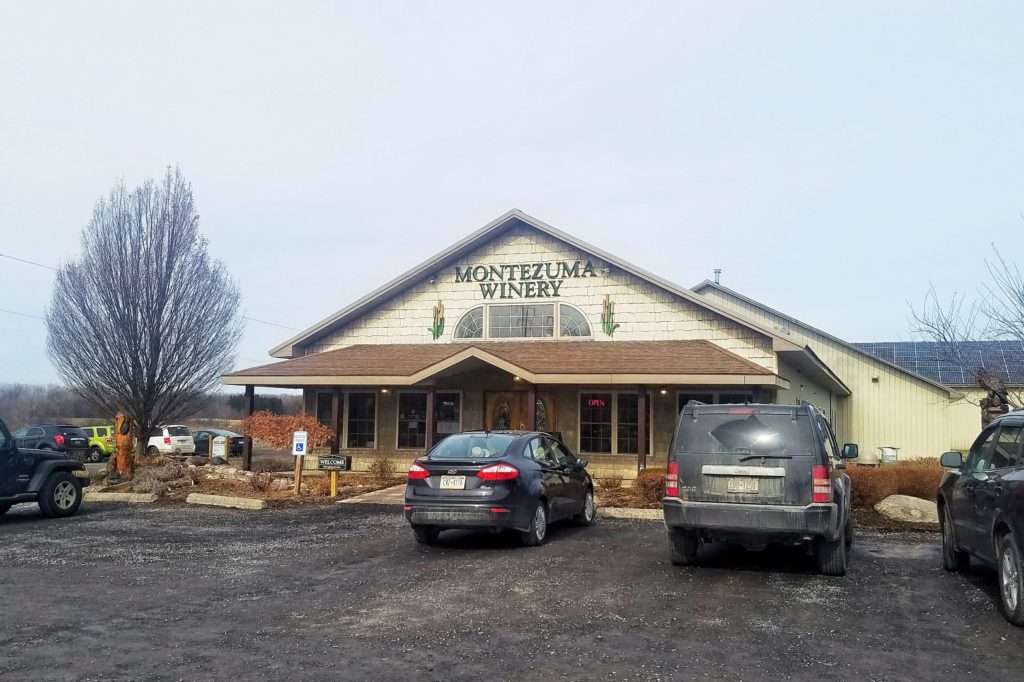 This winery was a good one to start with because they got us set up with a couple of maps of the finger lakes and some suggestions for our route.

They sent us to Three Brothers Winery which is a really cool concept but I wouldn’t recommend going there if you do not like sweet wines. By the end of our time there, we were tapped out on sweetness. 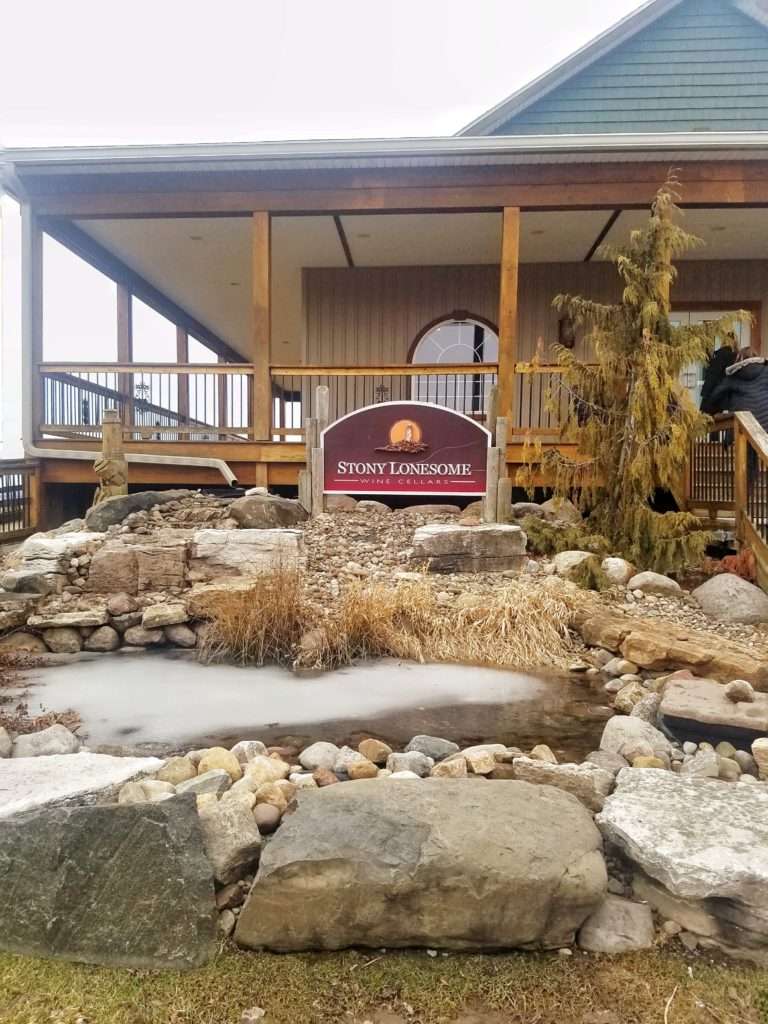 The winery has three different wineries (each representing a different brother) and a brewery on the premises; Stony Lonesome, Passion Feet, Bagg Dare, and War Horse Brewing Co. Each one had a distinct concept that you could see in their designs, wine names and tastes.

NSFW: An example of some of the names of their wines are Poor Limp Richard’s, 69 Ways to Have Fun, and Skirt Lifter! 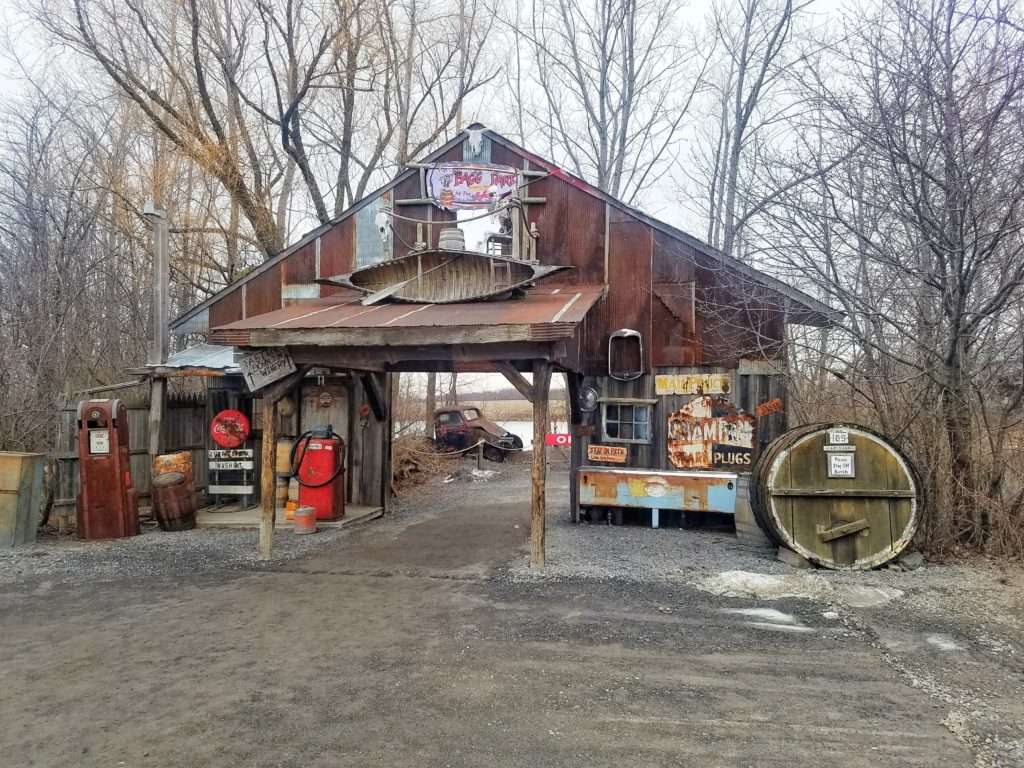 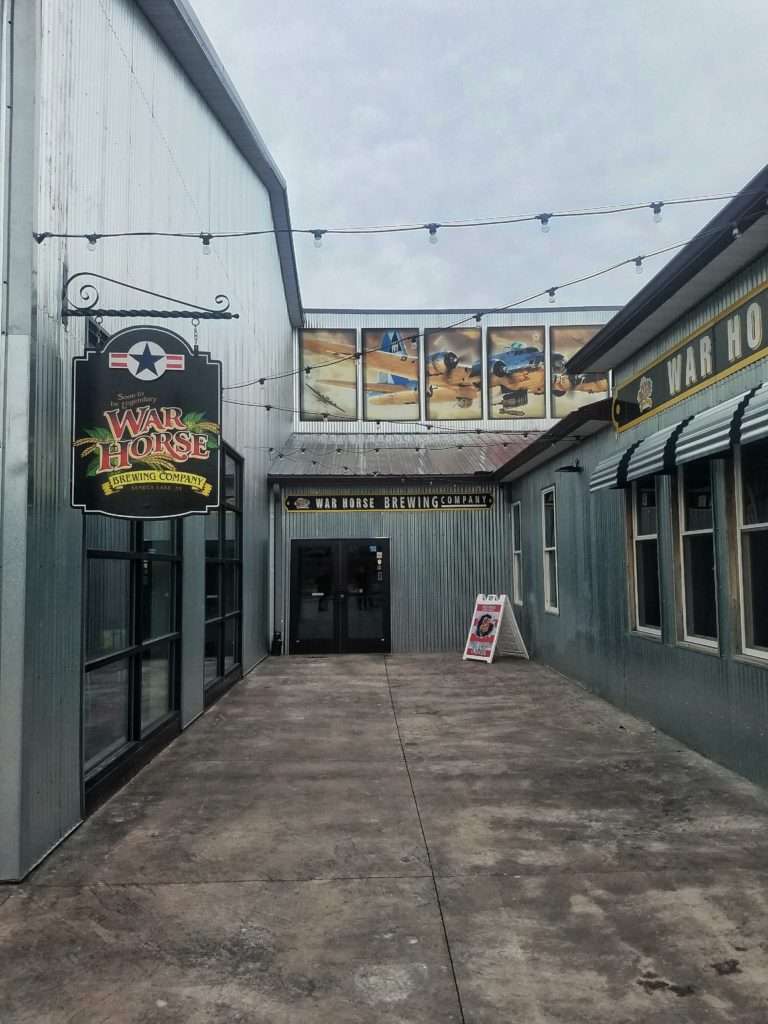 Our next stop was Swedish Hill Winery, which was more of a traditional winery to the region. The man who was giving us our tasting figured out very fast what our preferred tastes were and brought us on a bit of wine journey!

He definitely ended up giving us much more than our specified 5 chosen wines but he figured out exactly the type of wine I love and I ended up buying a bottle! Highly recommend this winery as a place to start when you get to the Finger Lakes. They know their stuff! 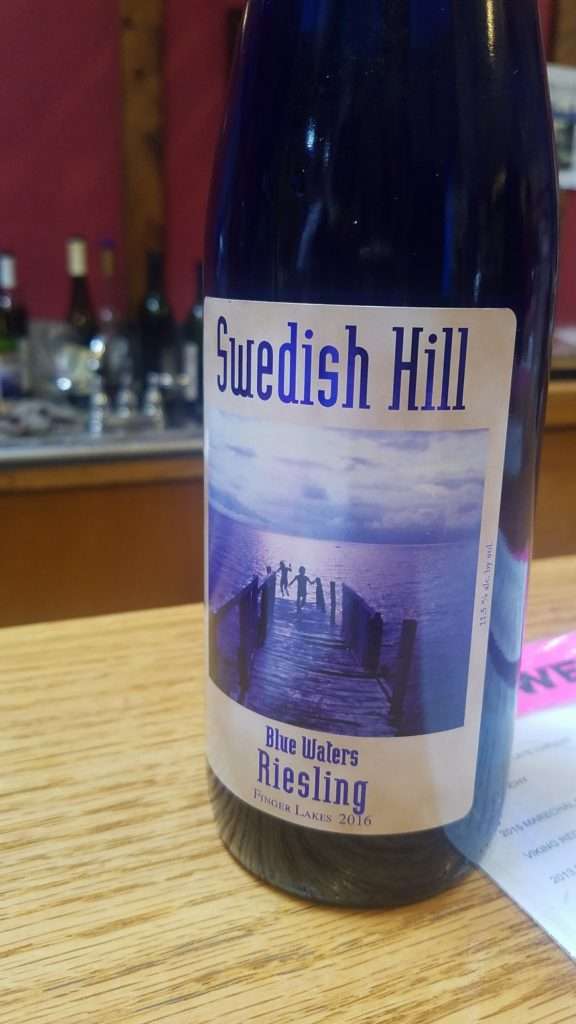 In the few hours of the day that we had left, we hit as many wineries as possible. We enjoyed a wine and food pairing at Varick Winery & Inn, photographed the lake from Goose Watch Winery, made local friends at Buttonwood Grove Winery, rushed through the Thirsty Owl Wine Co, then finally settled down for some food at Americana Vineyard’s Cafe. After a long day of wine, we treated our self to a high-carb dinner of Mac N Cheese, and Beer. 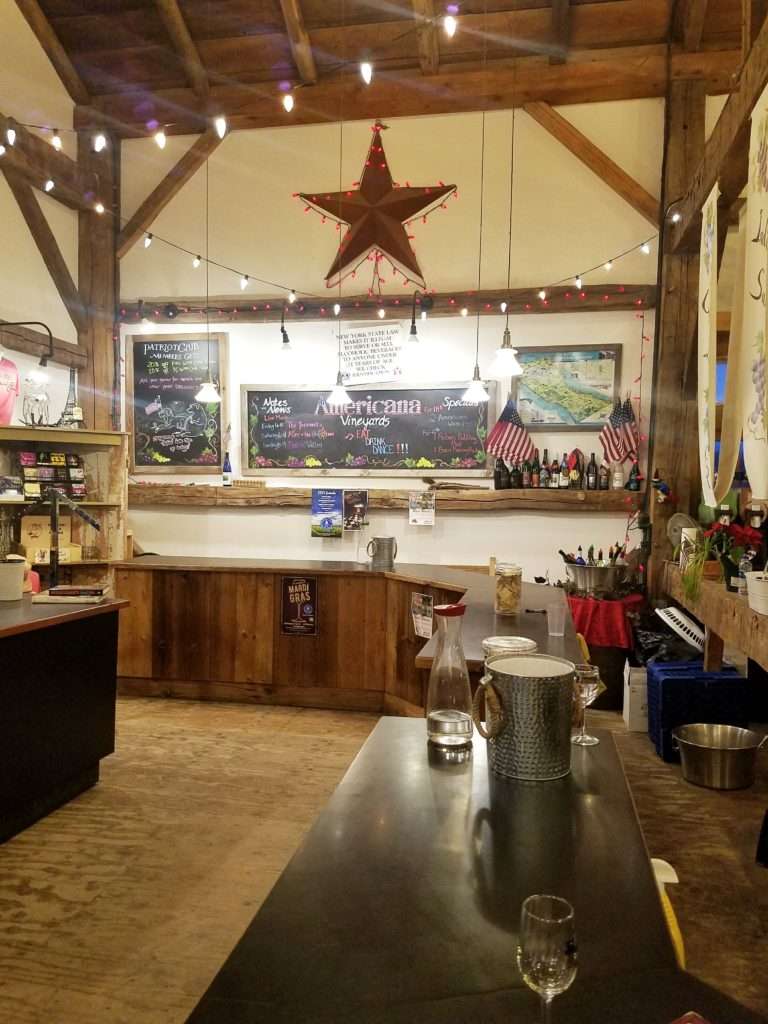 Americana had live music going on but we decided to just head to the Airbnb early, and it’s a damn good thing we did, because the Airbnb turned into a disaster situation!

We arrived to the apartment and after a couple of minutes of skepticism on how to get into it, we approached the door and typed in the code to access the key. But it didn’t work! We tried again, and again, and again, and even tried shifting the numbers up and down, thinking maybe it was a typo? After trying to pry open the lock box, we finally decided to call the owner, but she didn’t pick up!

ProTip: Reach out to your host 24 hours in advance to verify check-in information and emergency contact info! You never know when your host is going to hop on a flight to Costa Rica during your check in time! (Insert eye roll here)

After about an hour of desperate calls, text messages and voice mails, we gave up and decided to try to find another place to stay for the night. Our first attempt failed, as they said it was too last-minute and didn’t have anything set up but our second attempt was immediately successful.

We reached out to Kathy telling her our predicament and she responded within in minutes telling us to come right over! Driving to the house at night was a little sketchy because we had to turn down a long winding path through a vineyard to get there, but she was waiting by the door when we pulled in so we knew we were in the right place! 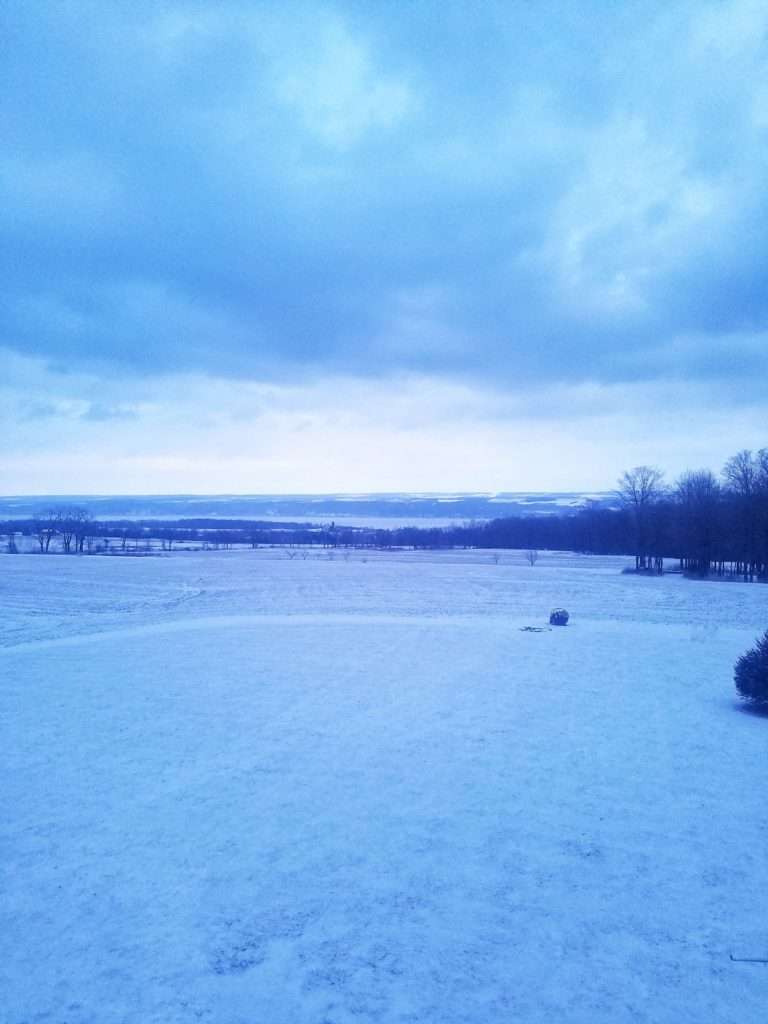 Kathy greeted us with a welcoming “You’re safe now!” and we knew we were going to be okay! She is a mother too and couldn’t imagine our stressful situation and was more than glad to take us in. Kathy and her husband Bob were so kind and accommodating, and we were able to get a good night sleep there.

They had a large beautiful home with two guest bedrooms and a shared bathroom. Our room looked out over Cayuga Lake which was a beautiful view to wake up to in the morning. We joined Kathy in the kitchen for some breakfast and chatted with her about how her and her husband retired from their corporate New Jersey jobs and moved up to the Finger Lakes to own their own vineyard! We told her about our previous day and the unorganized chaos that led us to the sweet wine vineyards. She said that we had gone to ALL the wrong places that day and that she’d help us out!

She sat down with a map of the Finger Lakes and laid out our entire day for us. We had an itinerary of sight-seeing, beer, whiskey and wine, all with the intention of making it home by 9pm! She was even nice enough to map out a good route for us next time we find ourselves in the Finger Lakes region! In the summer, more of the beautiful sight-seeing areas will be accessible. Thank god our luck led us to Kathy, or we would have missed out on some great stops and information!

I’ve always been a firm believer that everything happens for a reason! 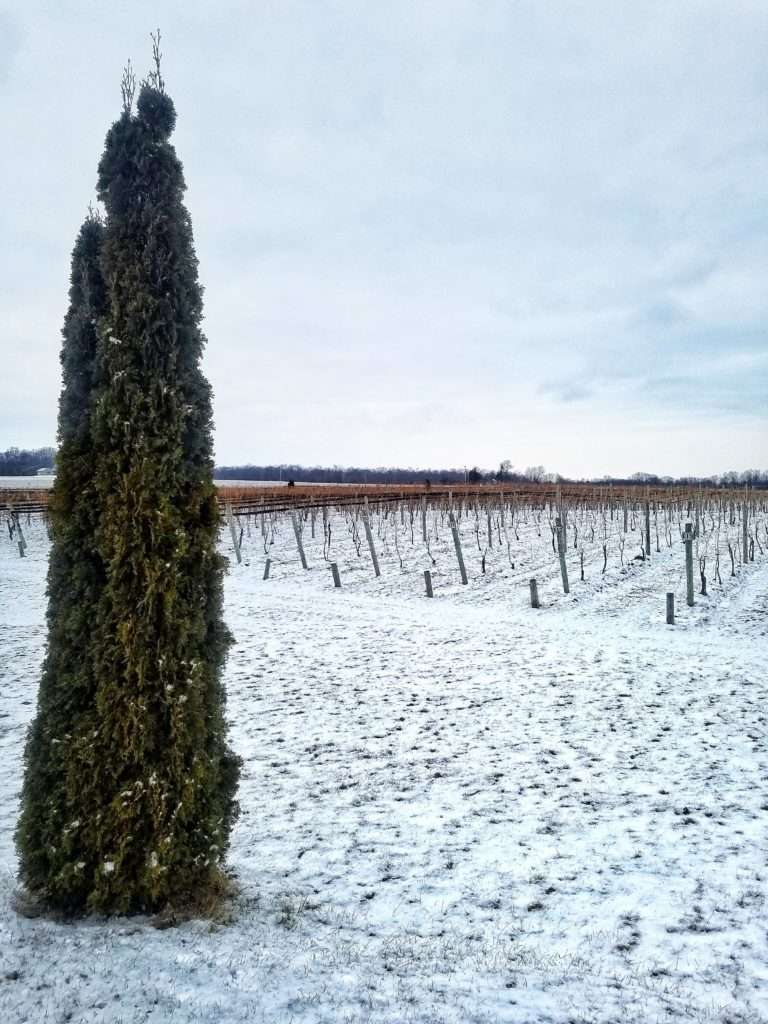 If you find yourself in the Finger Lakes Wine Region, definitely stay at Sunrise Hill Vineyard with Kathy and Bob. I promise you will not regret it! If you haven’t signed up for Airbnb yet, use my link (HERE) to get a credit of $40 towards your first stay!

After a bit of a late start, we hit the road and drove south to Taughannock Falls State Park. This beautiful waterfall can be seen from an overlook point above and by walking a path to see it from below. We decided to do both since it was the perfect snowy conditions for some beautiful photos! 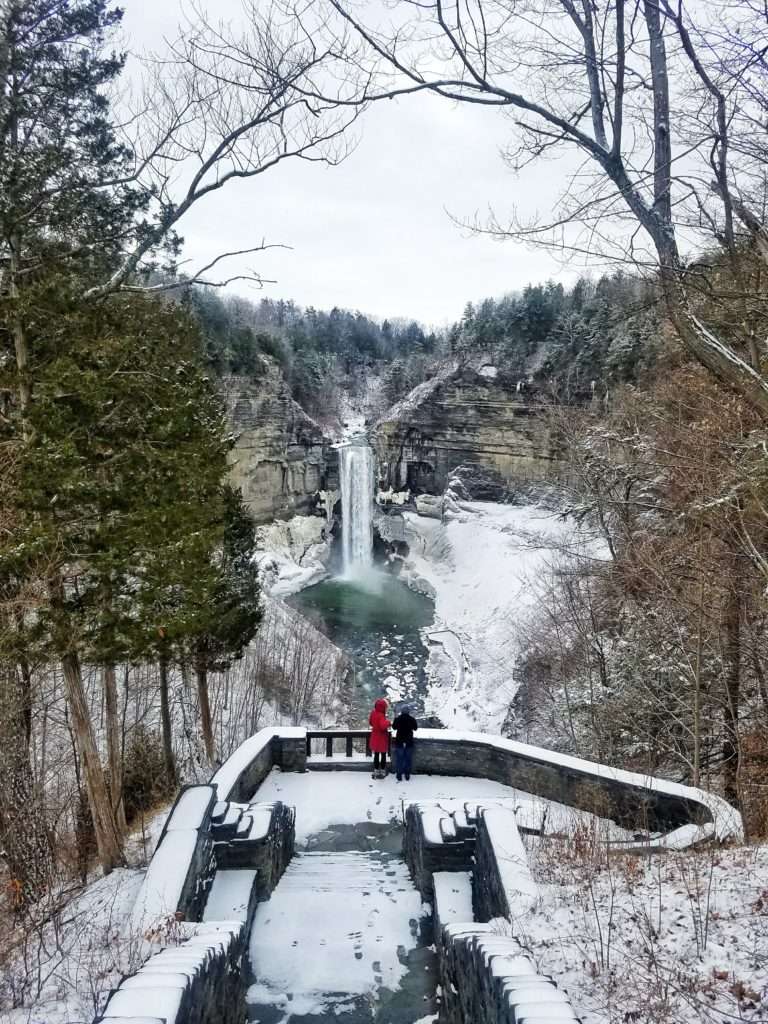 The walk out to the falls was about a 3/4 of a mile each way and it’s accessible for all ages and abilities. The view when you get there is amazing (but a bit misty!) This is definitely doable no matter the time of year. 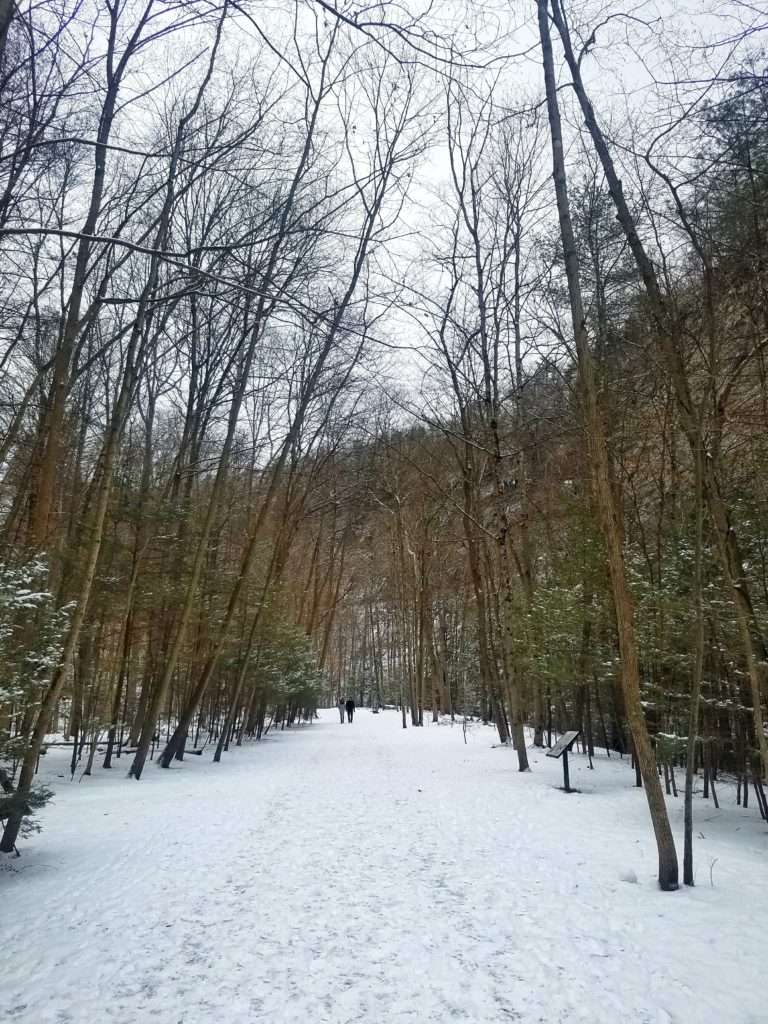 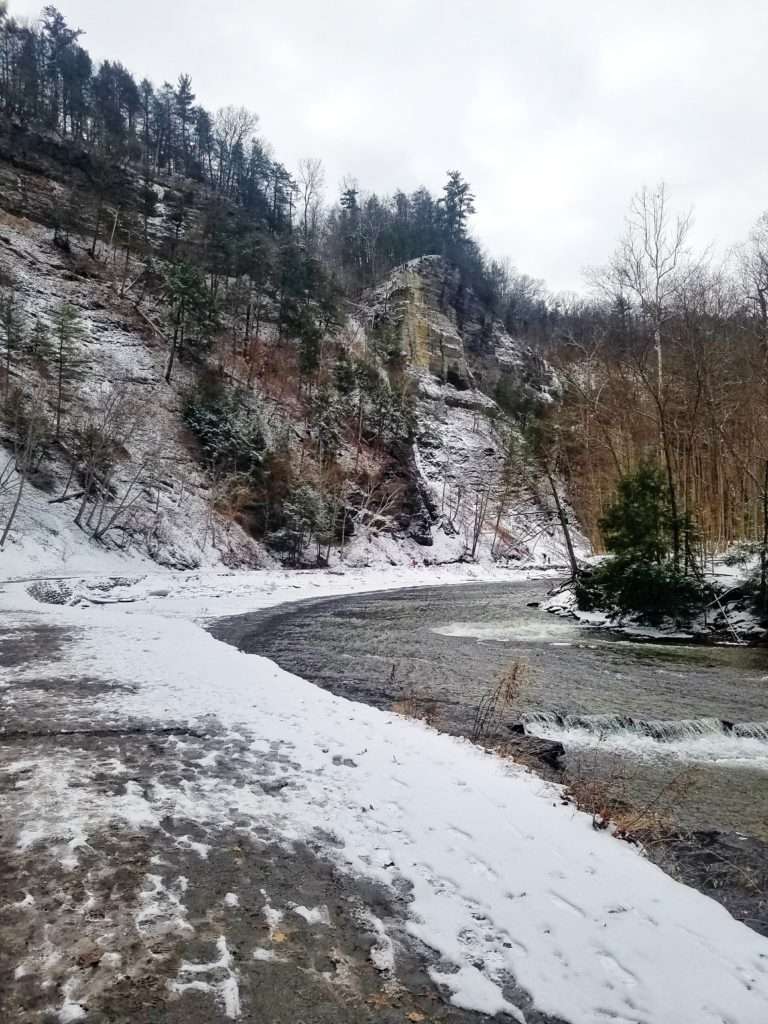 Once you reach the falls, there’s a platform you can walk out onto to get views from all around the waterfall. You’re surrounded by massive cliff walls on three sides, and because it had snowed the night before for us, a lot of the surfaces had a light dusting of snow. The view was absolutely stunning and I’d recommend it for everyone. 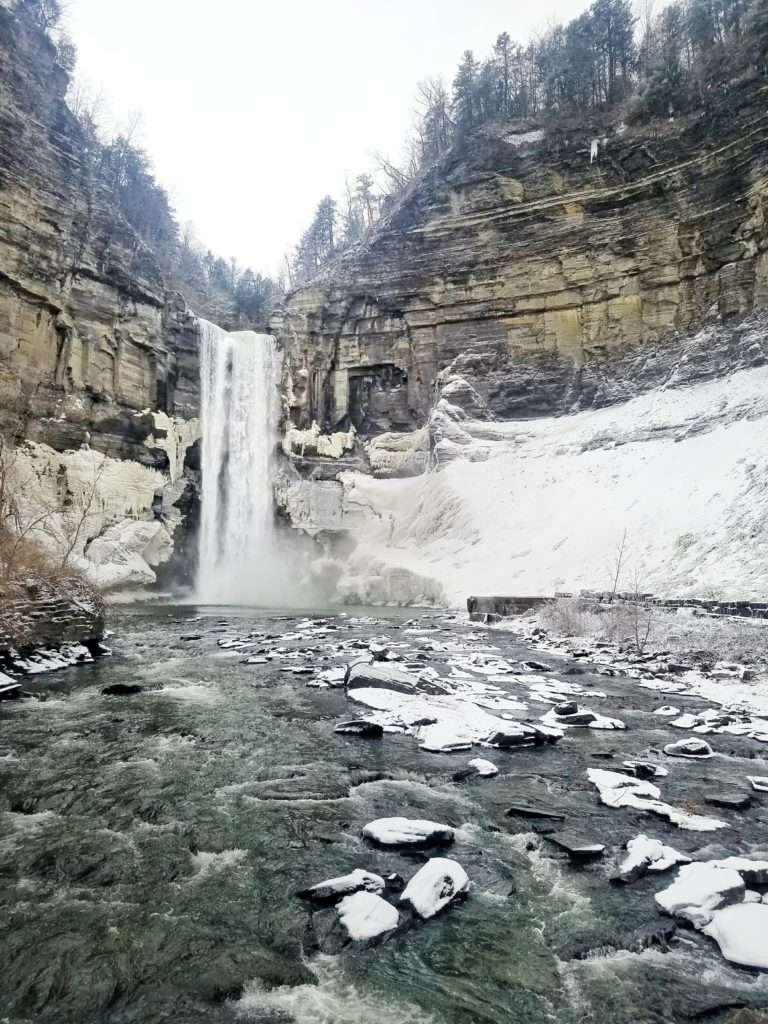 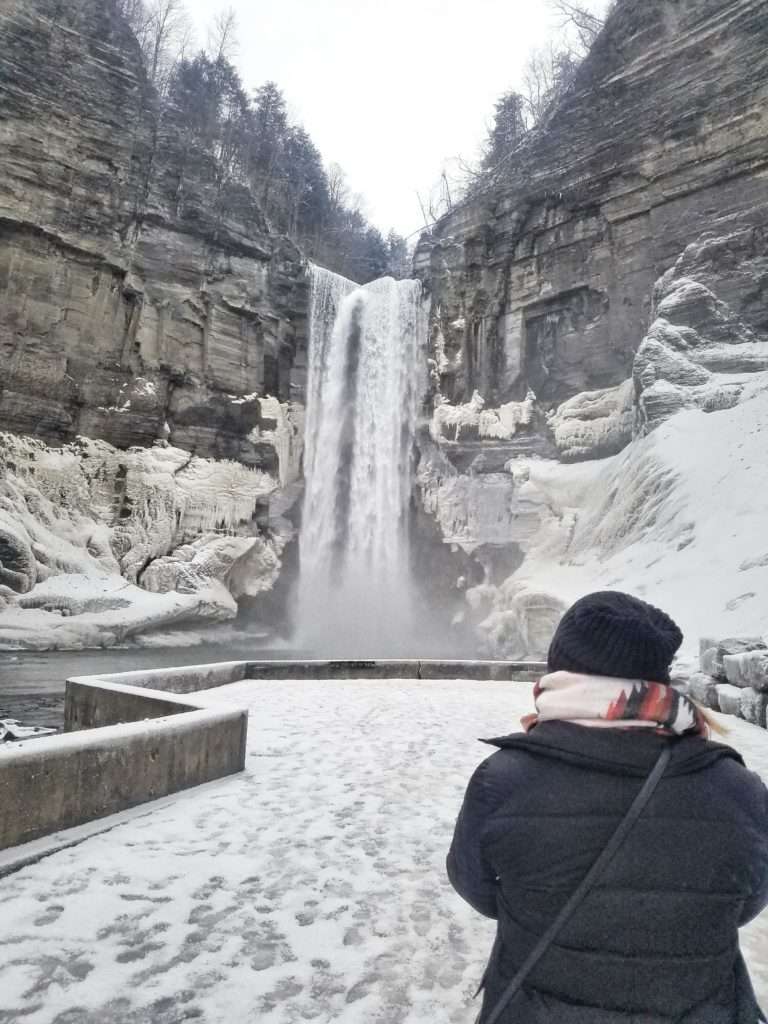 After the falls, we drove across to Seneca Lake to grab a beer and check out the view at Two Goats Brewing Co. This place was located on a cliff, but the inside stole the show for me! The ceiling was covered in dollar bills and the walls were a collection of items ranging from bicycles, to records, to pop art! Definitely a cool place to check out!

ProTip: Bring your dog! A lot of these places were dog friendly, which made us very happy! 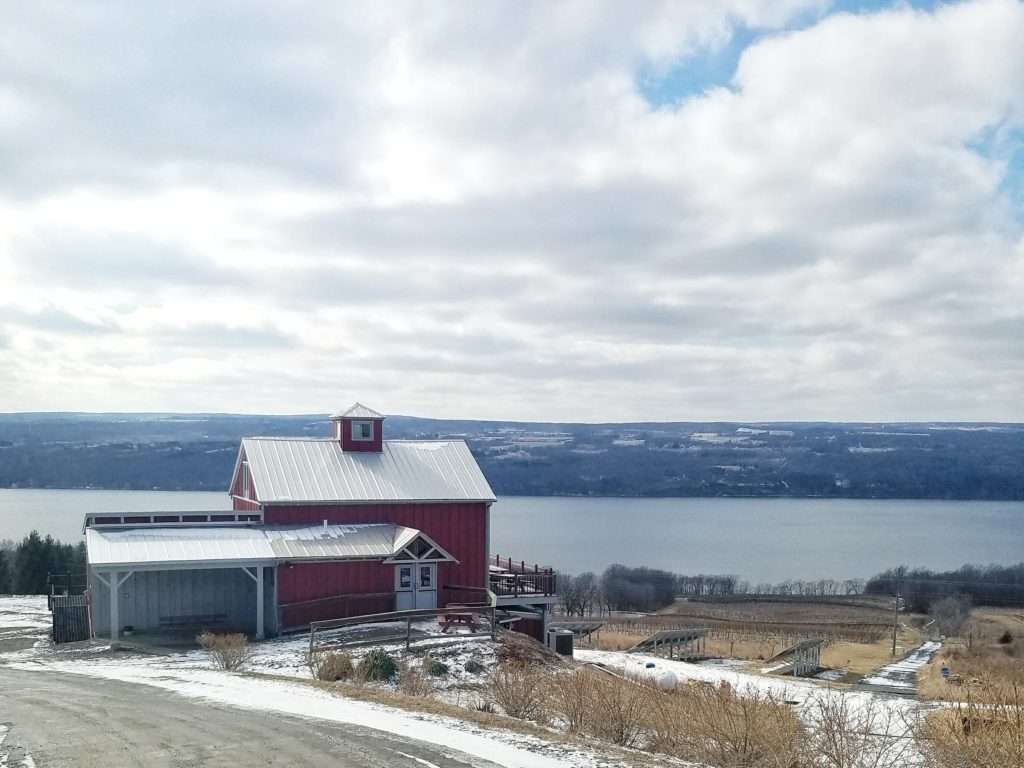 The next couple stops were right down the road, side-by-side! Finger Lakes Distilling and Damiani Wine Cellars! At the distillery, we opted for a whiskey tasting and tried four whiskeys including a clear corn whiskey (which I’m typically afraid of) and a few cask-aged whiskeys. Each one was delicious and didn’t leave a bad taste in the mouth. I particularly loved their “McKenzie Pure Pot Still Whiskey” which he said resembled a smooth Jameson. If it wasn’t a bit out of my price range, I definitely would have bought a bottle! 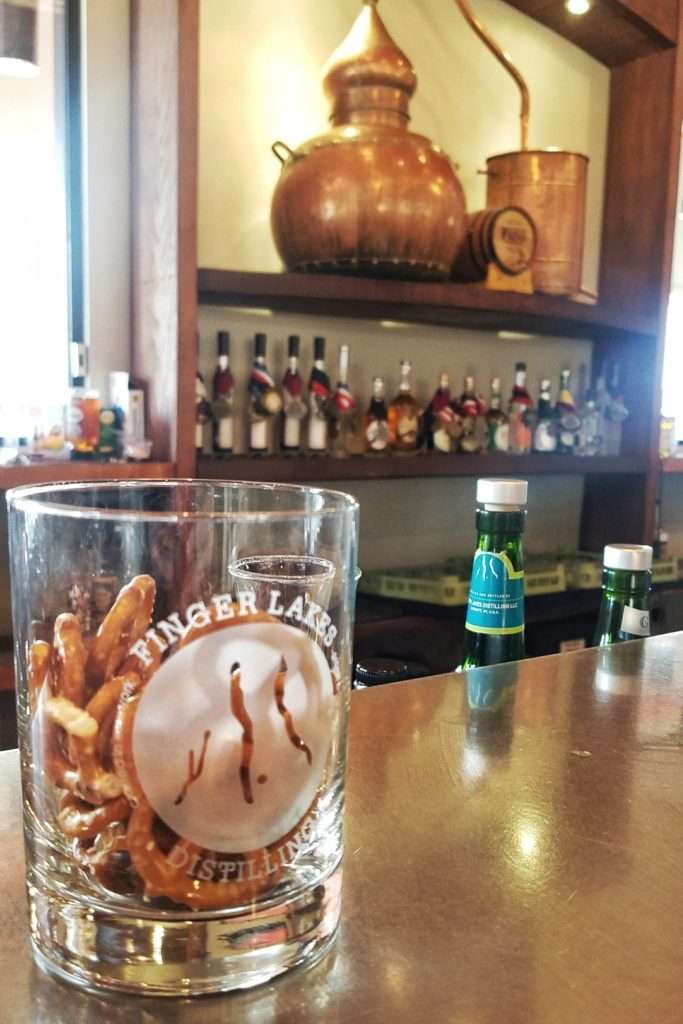 Damiani Wine Cellars is where Kathy and Bob sell 70% of their grapes to, so we had to check them out! They had a much more old-fashioned look to their location but the wine was some of the best we tried on the whole trip. The person pouring for us even let us try a special rare aged wine that was smooth and delicious! She said they only had 6 bottles left of that specific one. I took home a bottle from here too! Sorry I’m not sorry!

ProTip: Make sure to ask about the Gewürztraminer wines! This was a new find for us!

We grabbed food at a Tuscan style restaurant on Seneca Lake and then made our way out of the Finger Lakes region and towards our last stop in Auburn, NY. This came as a recommendation from my boyfriend and it was definitely worth the visit. 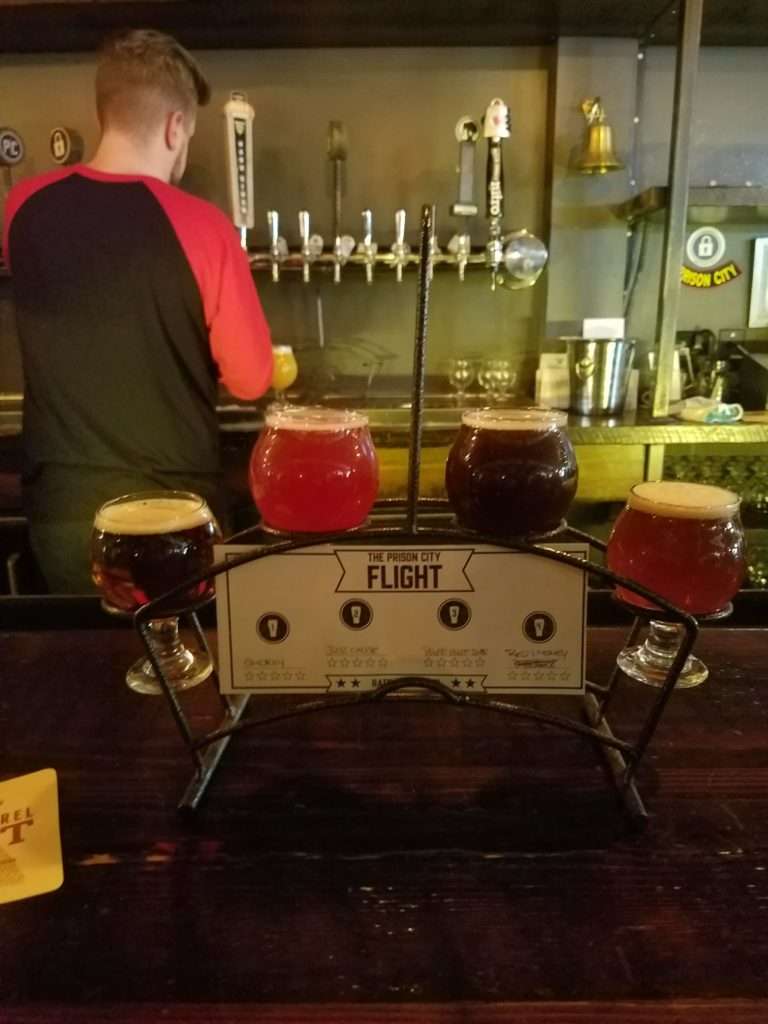 Auburn, NY is known as Prison City because of their maximum security prison in town, so naturally this brewery was called Prison City Brewing! I ordered a flight (as usual) and Brianna got a beer as well. They had this one beer called “Puff Puff Shiv” that tasted like chocolate milk! The design of the place was really cool too. You can tell they had a good time playing up the vibe of a prison. I highly recommend stopping here if you ever find yourself in that area! 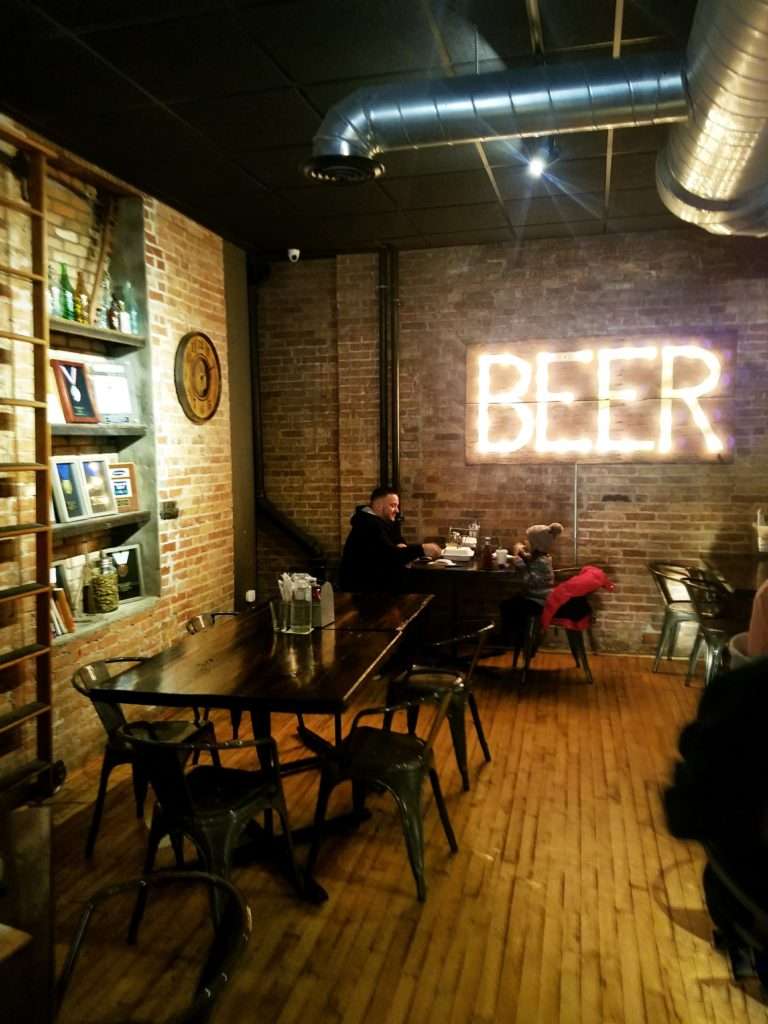 We were absolutely exhausted by the time we made it home but it was a hell of a weekend trip! The region has a million things to do and we barely skimmed the surface! We are already planning our summer trip back out to the area to explore more!

Anyone have any upcoming weekend adventures planned? Tell me about them in the comment section below! Until next time… 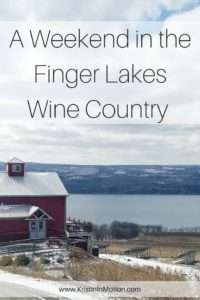