If you’ve never heard of Chris Guillebeau, I’d highly recommend reading about his story. He has authored several books including The Art of Non-Comformity and The $100 Startup, hosts a daily podcast on side-hustles and runs a successful blog on a variety of topics. But I had first heard of Chris because he had successfully traveled to every country in the world over the course of 10 years.

To have completed such a daunting task, there must have been a goal specific plan behind it. Intrigued by this, I decided to read his book The Happiness of Pursuit: Finding the Quest That Will Bring Purpose to Your Life

, an inspiring read about goal setting and undertaking quests.

The Happiness of Pursuit

Some people find happiness not in achieving their goals, but in the pursuit of the goal. Creating a journey or a challenge on the way to a long-term goal. This requires clear, concise plans, budgeting and long term commitment. Chris’s book dives into the stories of other “Quest-ers” around the world, capturing stories ranging from cooking a dish from every country, bicycling across continents, taking a vow of silence and publishing one million photos.

Chris’s quest was travel related but quests don’t have to be any specific category. What they do need is a certain measurable criteria and a specified end. If it’s left vague or open-ended, there will be no way to know when a quest is complete.

The book talked a lot about plans, funding, persistence and sacrifices, and by only a few chapters in, I had already brainstormed up my own Quest…. To Collect a pin from every Hard Rock Cafe in North America!

A lot of people have collections but I’m sure not many people make quests out of their collections. I’ve been collecting pins since as long as I can remember! I believe my first pin was a sparkly flip flop from Myrtle Beach, S.C.,

Which judging by the “sparkly-ness” of it, puts me at about 8 years old! 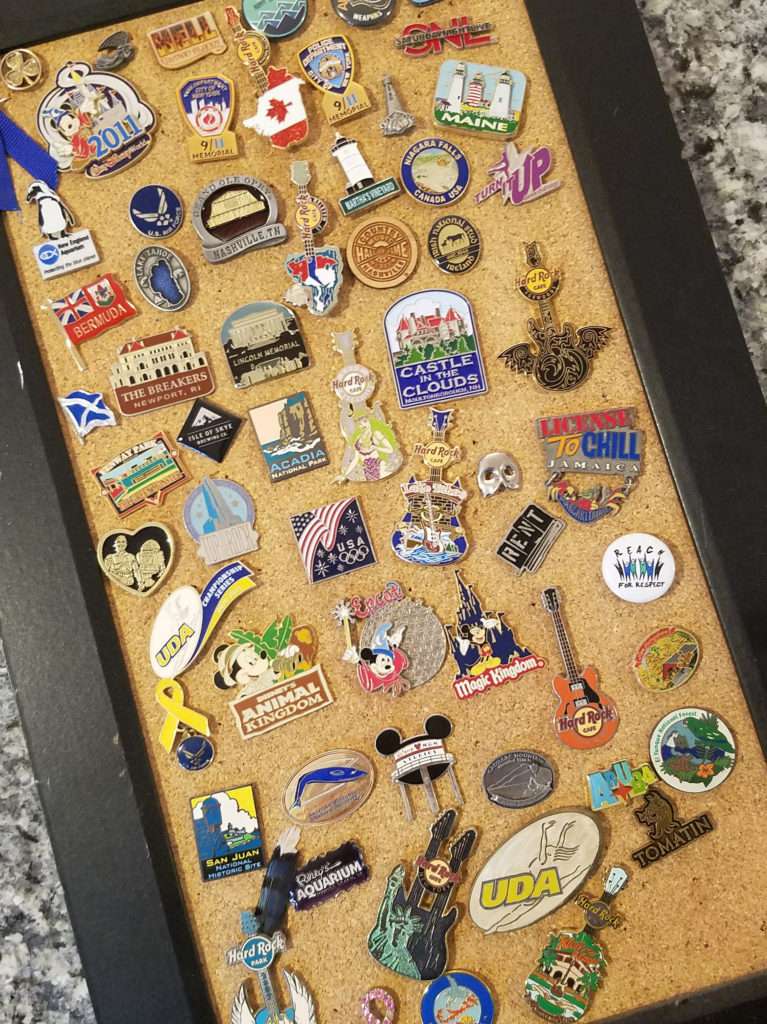 I believe my decision to start collecting pins was officially cemented during our family trip to Disney World, Florida in 2011 when I was 9 years. If you’ve ever been to a Disney park, then you know that pin collecting and trading is huge there! In an effort to stop me from spending all the money on pins, I was only allowed to purchase one pin from every park. 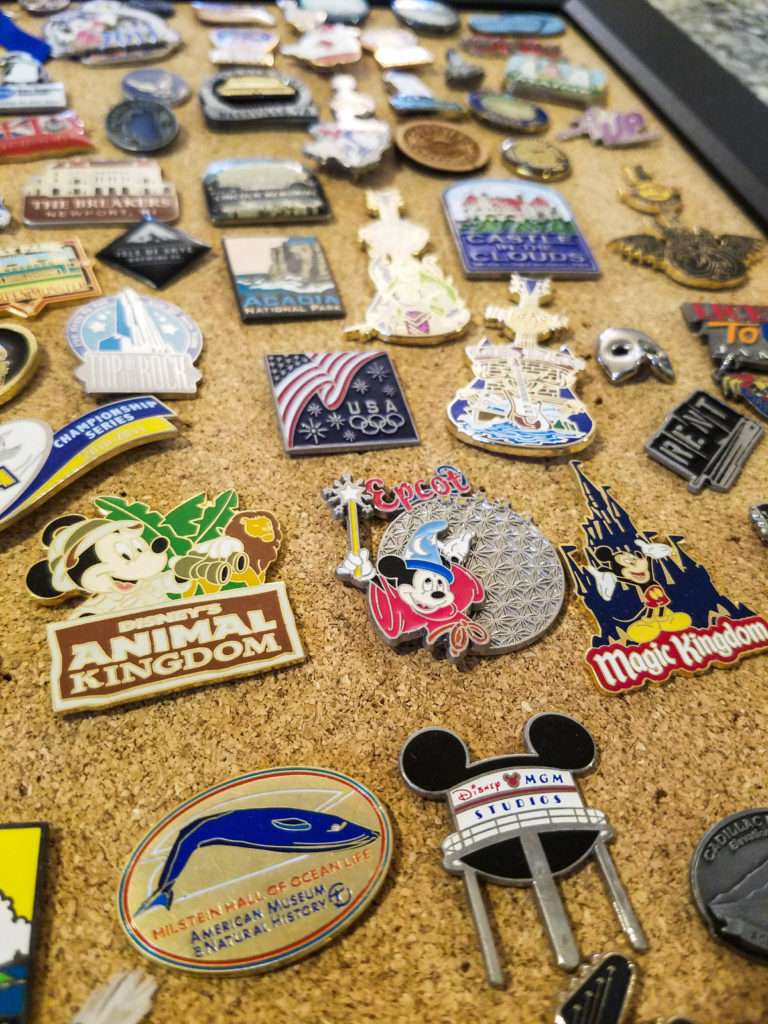 I got into the habit of buying them everywhere I traveled. You could sometimes even find them at specific attractions like Top of the Rock in New York City and Broadway shows!

At some point I realized that Hard Rock has almost as epic of a pin collecting world as Disney does, and thus began the guitar pin purchases! I even have a rare pin from “Hard Rock Park” which was a theme park in Myrtle Beach, SC that opened and went bankrupt within the same year!

I honestly could probably sell that thing for money… hmmm…

Now, any time that I travel somewhere with a Hard Rock Cafe in the vicinity, I make it a priority to stop by the store and buy a pin!

Making a Plan for my Quest

The first step was to define the “what” of my quest. Each Hard Rock store contains a variety of pins to choose from including classic guitar pins, specialized location guitar pins, girls, motorcycles, logos, etc. There are usually plenty to choose from, but I personally decided to stick to collecting the guitar pins that were customized to the location. That way they have a theme but are all widely unique! 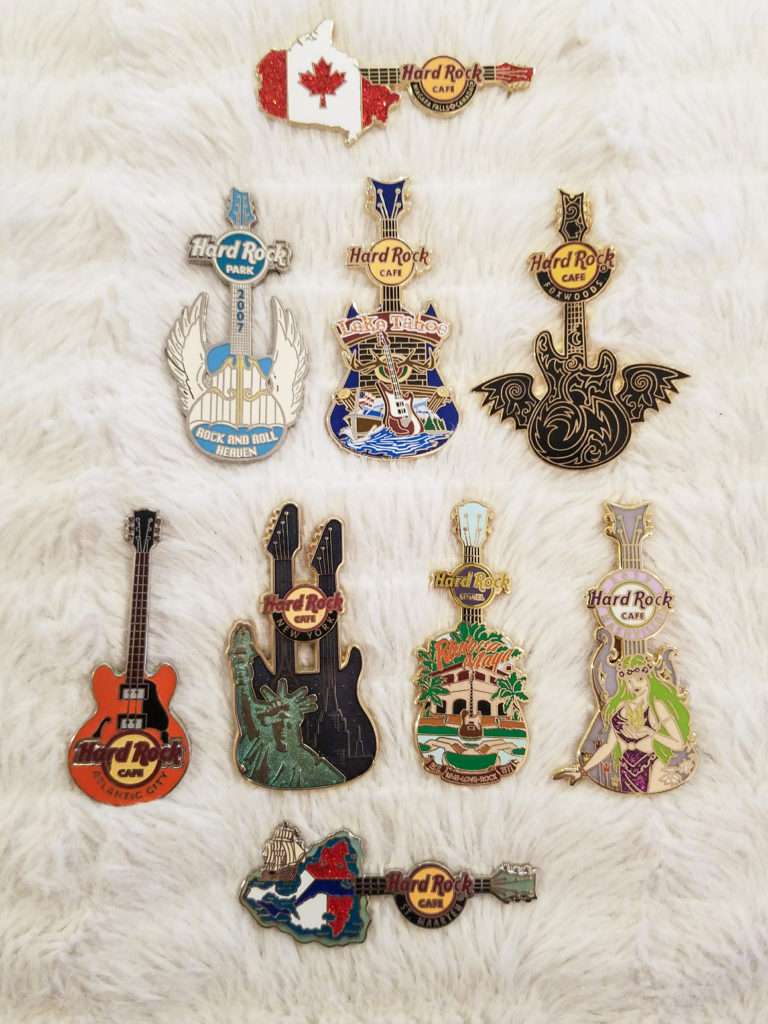 Next I had to decide on the “when.” I personally decided to leave my quest open ended, or a life-long quest, because there was no rush to collecting all of these pins.

The largest part of defining my quest was the “where.” I made an excel spreadsheet and added all of the current locations in USA, Canada and the Caribbean. I also added columns to track when I traveled to this location, who I was with and any specific notes or memories. This way it acts as more of a travel journal as well rather than just a tracker.

Defining the specific list of places was important because chances are that new Hard Rock locations will continue to be built before I finish my quest, so I need to end it somewhere!

And if they close down, it’s not my fault! Tis’ life!

This list can now act as inspiration for when I’m trying to schedule a spontaneous weekend trip. For example, Indianapolis, IN has never been a place I’ve thought about visiting, but I will make an effort to get there someday because it’s a part of my quest now!

Are you a fan of running? You could make a goal to run a 5K every weekend for a year! Or maybe you prefer hiking mountains? Make a plan to hike every mountain over a certain elevation in your state!

I have a friend from college currently trying to hike the NH48, a list of 48 mountains with an elevation of 4000 feet or more!

Like road tripping? Collect post cards from every state! Or maybe if you enjoy photographing your own journeys, you can make it a goal to take a photo in front of every “Now Entering…” sign in America!

Alcohol connoisseur? There are plenty of Wine or Beer Trails across the Nation. Make it a goal to go to every vineyard on the CT Wine Trail! Or collect a sticker from every brewery in Maine!

A lot of restaurants or bars will reward you for trying every beer on tap, or visiting a certain amount of times during a month.

Are you a Foodie? Make it your goal to eat at every diner featured on Diners, Drive-ins and Dives.

If travel is your passion, maybe you make it a goal to visit every National Park in America, or see every UNESCO World Heritage Site in the world!

Okay, so you’ve decided what your quest is going to be, now you need to make a plan.

First off, take a look at your quest and decide a timeline. Will your quest have a deadline or will it be an open ended goal?

At least set a goal to complete it before you get too old to appreciate it!

Do you need to make a budget? Depending on your quest, it can get costly so it’ll be important to have a plan. Decide how much you can afford to dedicate to this goal and break it down by year to set a realistic end date.

Create some sort of organization, whether it’s a spreadsheet, a bookshelf, pins in a map, a display case, etc. Decide how you will keep track of how far along you are in your quest! It’ll become more and more exciting as you check things off along the way!

Take your passion and with it you will find your quest.There’s a certain joy to be found in the pursuit of a long term goal. Maybe it becomes a life long mission or maybe it only takes one summer. You decide!

Comment below with any thoughts or ideas you have on quests! I’d love to hear if you have one already or if this inspired you to start one!