Scotland is a beautiful country that is worth visiting any time of year. But Scotland comes alive in August especially. Between festivals, the weather, scenic drives, and old Scottish traditions, you will not be disappointed during your stay.

Edinburgh, Scotland is currently the world’s leading city for festivals. In August alone there are five huge festivals going on throughout the city, drawing in millions of people from all over the world every year. When we went last year during this time, we were hesitant in booking because neither my travel buddy Emily or myself are big fans of crowds. I can promise you, we didn’t regret it one bit. The city of Edinburgh was overflowing with art, music, dancing, theatre and more. There was never a dull moment the entire time we were there! 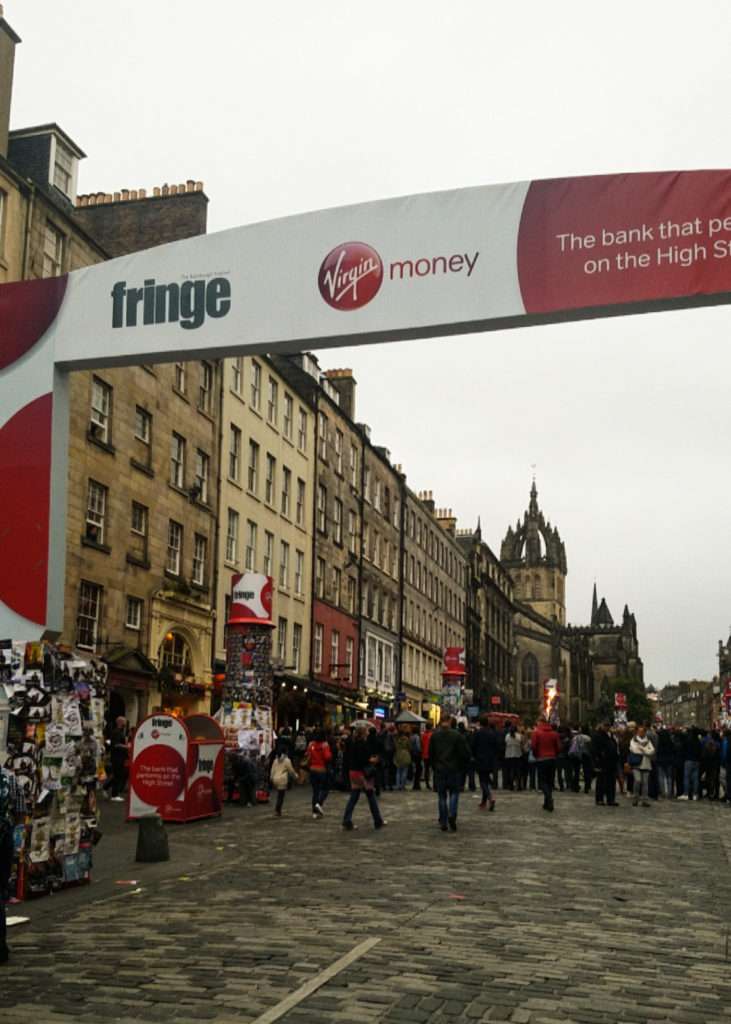 If you love art, The Edinburgh Art Festival takes over galleries, museums and public spaces with over 40 exhibitions of artists from all over. Besides the exhibitions, there are screenings, artist talks and plenty of tours to choose from as well to experience all of the art the city has to offer.

If you’re more into the performing arts, the Edinburgh International Festival is for you. Theatre, dance and other musical performances can be found at venues all over the city, large and small, with performances from around the world. 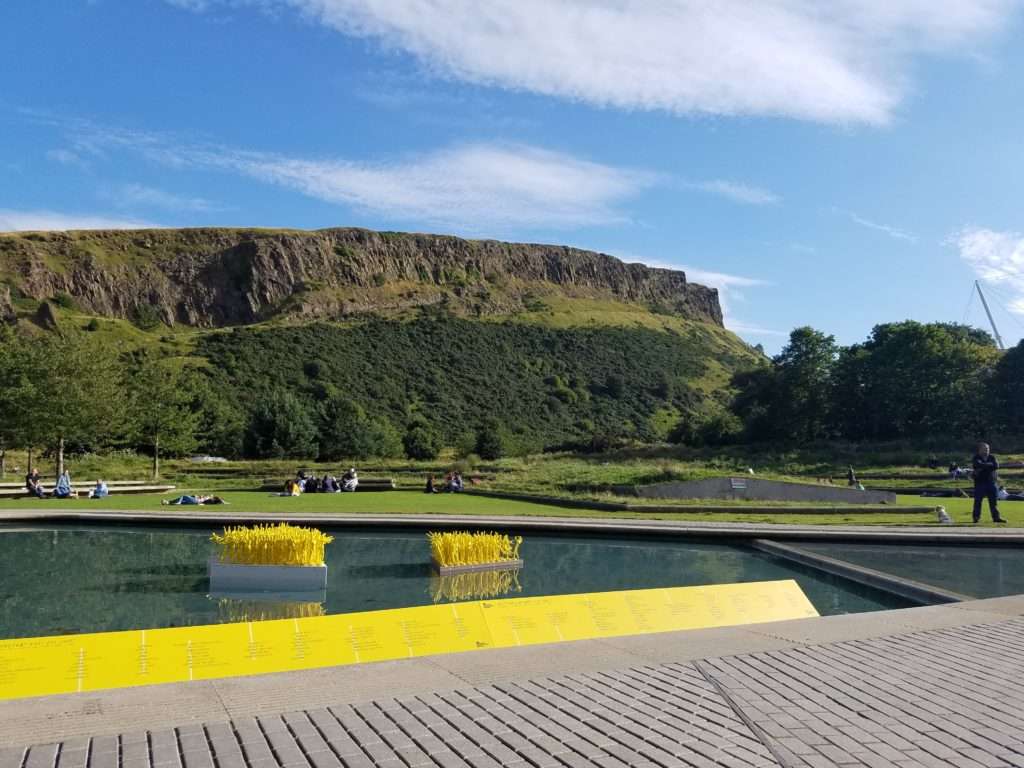 For travelers like myself and Emily, we found ourselves spending most of our time at the Edinburgh Fringe Festival. This festival started out as a rebellion of the International Festival, when several groups were refused entry many years ago. They decided to perform on the streets anyway, which started the tradition that lives on today. Anyone can come and perform on the streets of the Edinburgh during the Fringe Festival. 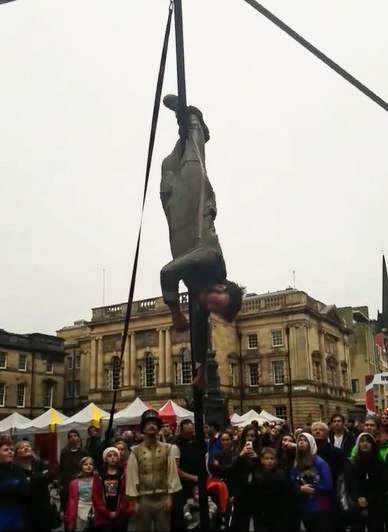 Walking down the Royal Mile, you will be inundated with performances ranging from Japanese drum groups, theatre performances, acapella groups, street performers, magicians, musicians, and even human statues. Many of the groups perform small snippets of their show then pass out flyers trying to get you to come see their main show at one of the hundreds of venue options. The festival never really seems to end, as you can still find a musician somewhere even walking back from the bars late at night. There are endless amounts of talent everywhere you look!

[Pro Tip: Always be aware of your surroundings while you’re walking, you don’t want to be THAT guy that walks through the center of a performance.] 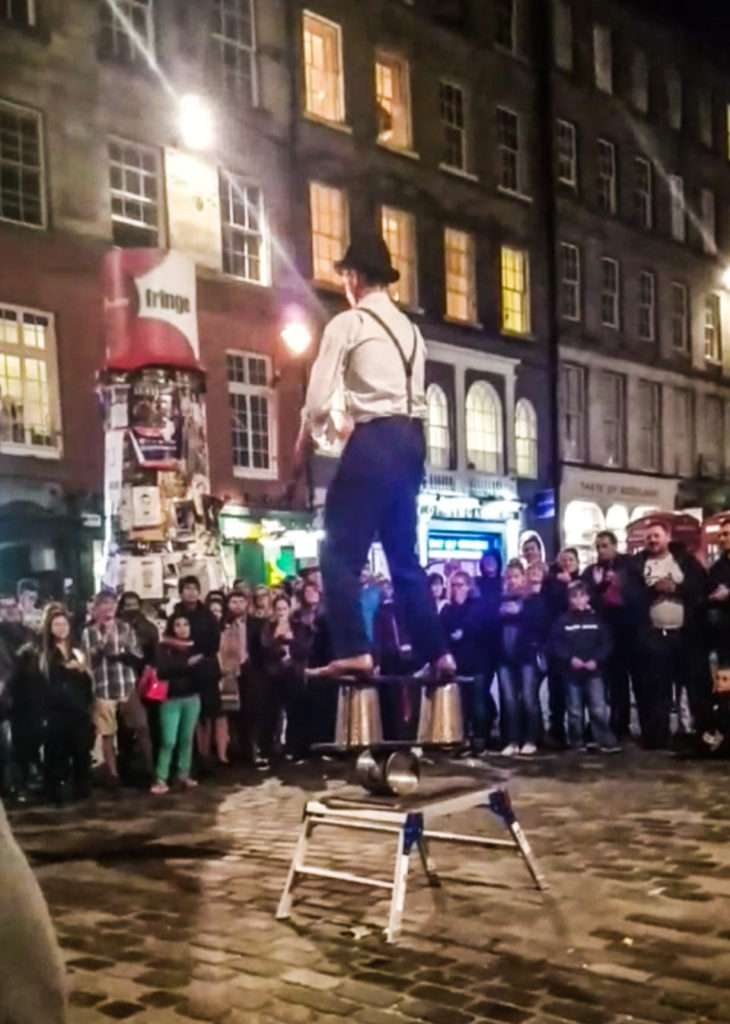 And for the traveling bibliophile, August is also the time of year for the International Book Festival. Located on the opposite side of the city from all the chaos of the performance festivals, the Book Festival creates a personal and intimate setting between authors and readers. You can keep yourself entertained for hours between events, workshops, signings and shopping.

Throughout the entire month of August, the Edinburgh Castle plays host to the Royal Edinburgh Military Tattoo. Musicians and dancers from over 48 countries gather each year for cultural performances ranging in themes. The sounds of drums and pipers echo across the city, with the night ending with a fireworks display above the castle. This festival sells out early unfortunately, and we were not able to get tickets while we were there, so buy tickets early! However, if you do fail to acquire a ticket, make sure to stand outside of the castle before and after the show, as the performers march through the streets. 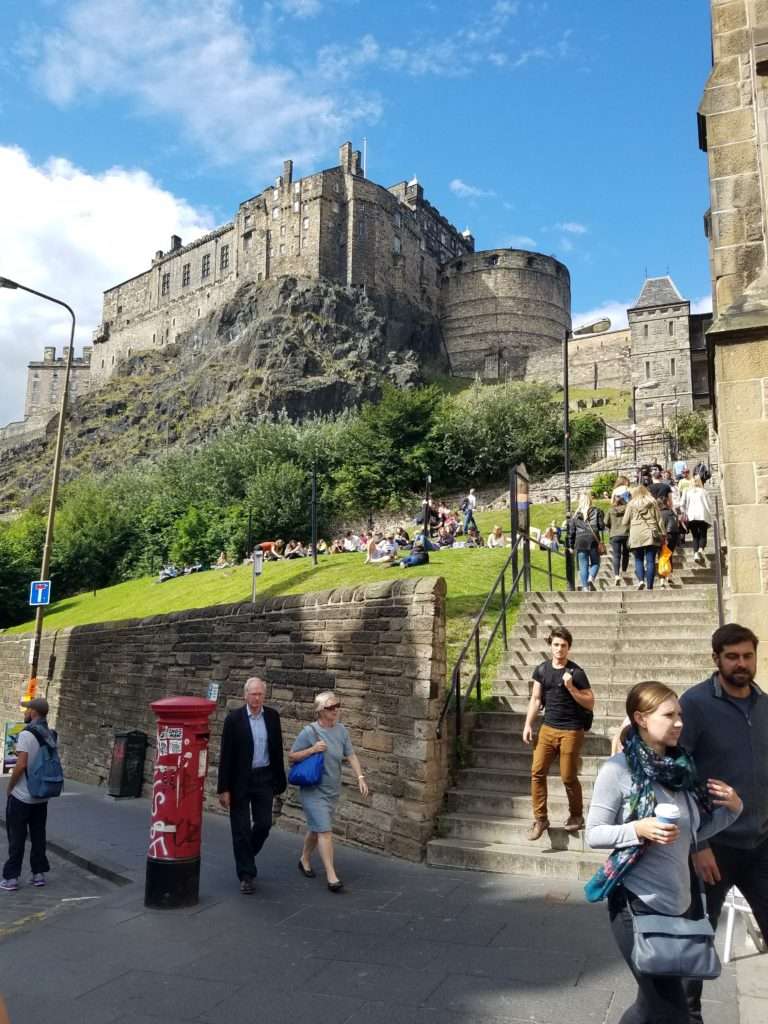 For another taste of the Scottish culture, the Edinburgh Castle is a must-see. Between the panoramic views of the city, the historic well preserved rooms and halls and the war museum, A trip to the castle can easily fill several hours. It will give you a look into a decade of history, including the Queens and Kings that reigned for several hundred years, up to the Jacobite Rebellion, when the castle was unsuccessfully attacked by Bonnie Prince Charlie.

[Pro Tip: Get there early to avoid lines and crowds and wear comfortable shoes! It’s a bit of a hike up the hill!] 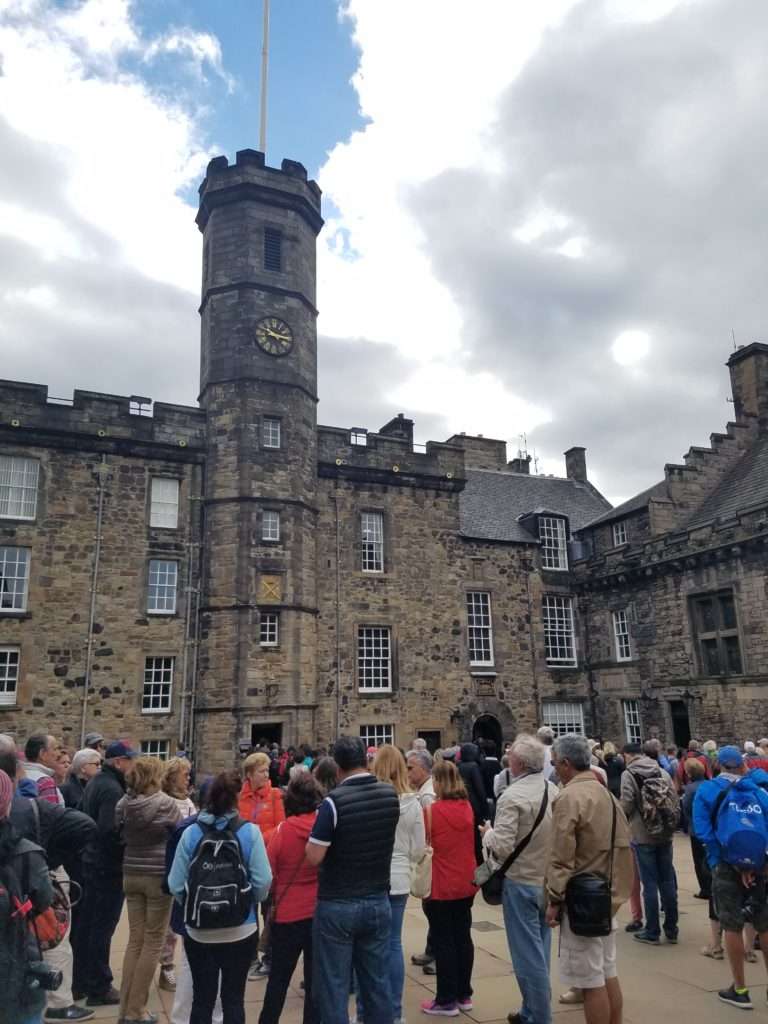 Throughout the entire city and country, everywhere you turn, you can find a bagpiper in a kilt. The entire country is very proud of their culture and traditions so make sure to take some time to stop and learn about the traditions. Though we didn’t have a chance to experience them first hand, the Highland Games take place between May and September every year across the Highlands. The games include an array of competitions ranging from hammer throws, hill sprints, tug o’ wars, and head-to-head clan competitions. 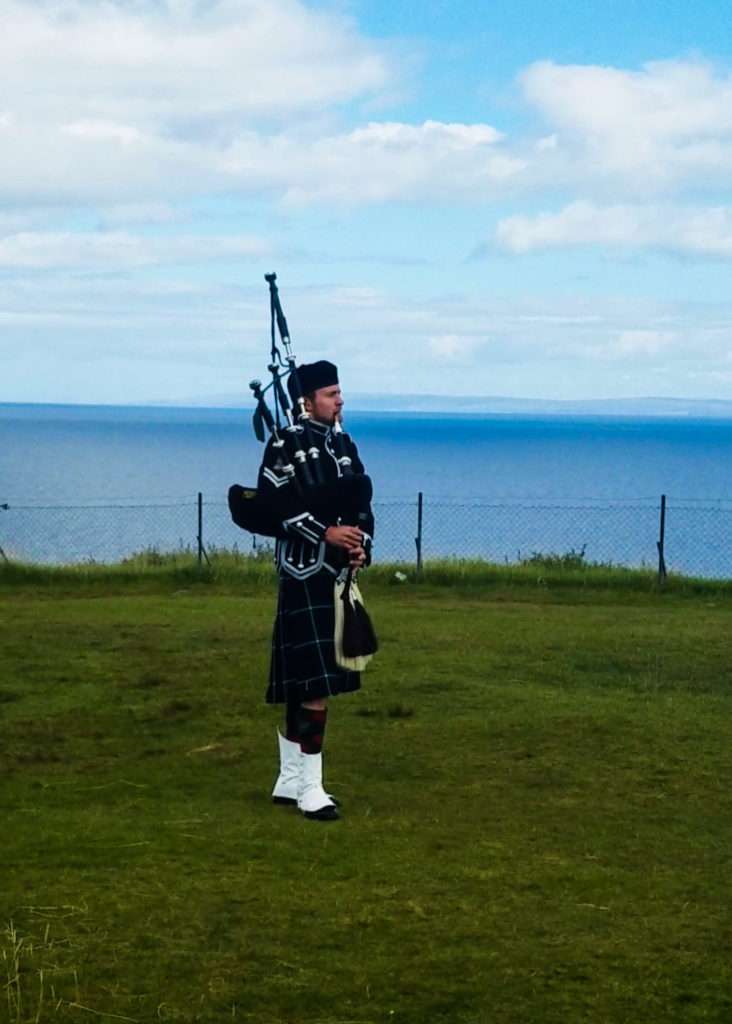 Scotland is notorious for the dreary, cold weather, so don’t get your hopes up for many warm, sunny days in this country. HOWEVER, if there was ever a time of year to get a higher chance of nice days, it’s August.

With temperatures in a comfortable, not too hot, not too cold range, you’ll be good traveling around with just a light rain jacket. And yes, a rain jacket is mandatory. The downpours come often and sometimes unexpectedly, and you don’t want to get caught outside without any rain gear. On the bright side, August typically is the least rainiest month of the year! We were absolutely BLESSED with the weather during our trip last year. We only experienced rain on three of the days and even had blue skies on occasion!

[Pro Tip: Spend the extra money and buy the water-PROOF jacket, not just the water-RESISTANT one!] 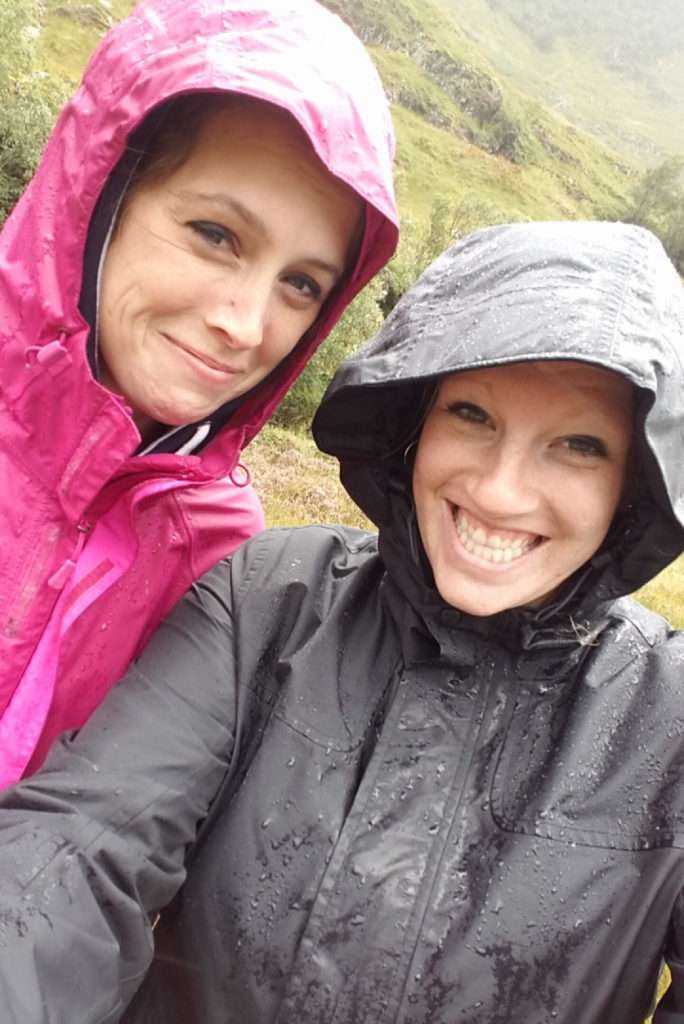 If you want to experience the greenery of the Scottish Highlands, the summer months are definitely the best time to do that. Because of the constant rain, the landscapes will be some of the most beautiful rolling green hills, mountains and glens contrasting the dark blue lochs and rivers that you will see. 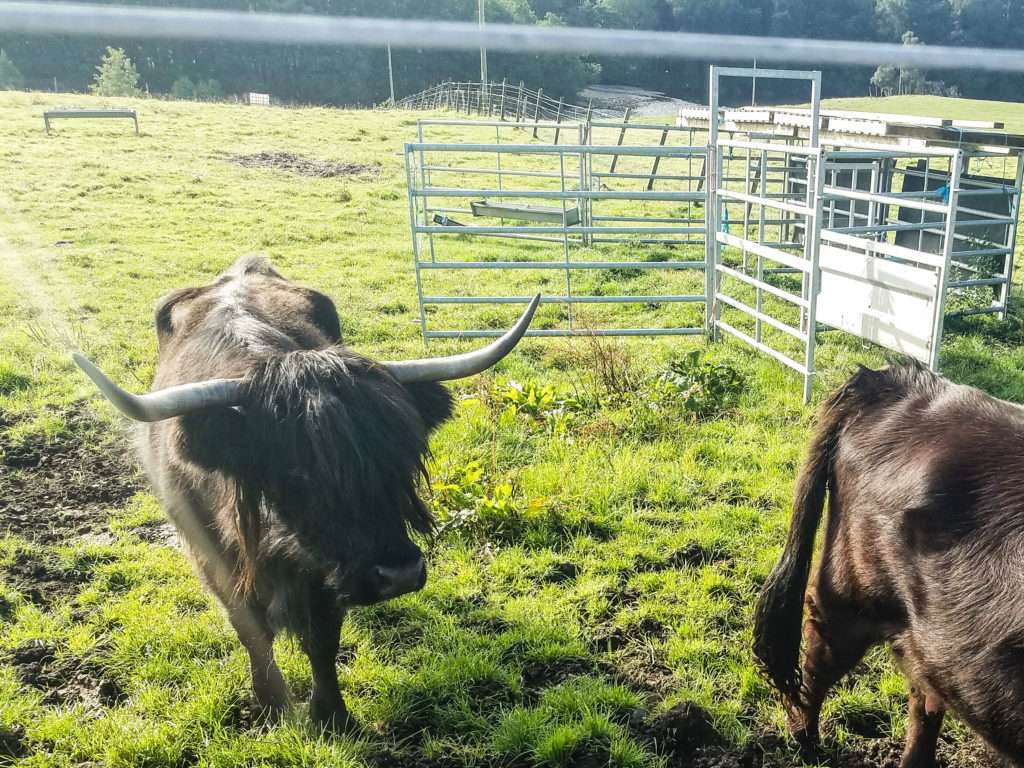 This time of year also tends to have the longest hours of sunlight. If you go up north enough, the sun may not set until close to 10pm! This makes it so you can get the most out of your trip up to the Highlands. Make sure to check out my post about our 5-day Tour with Haggis Adventures through the Highlands. I can’t recommend this tour company enough! 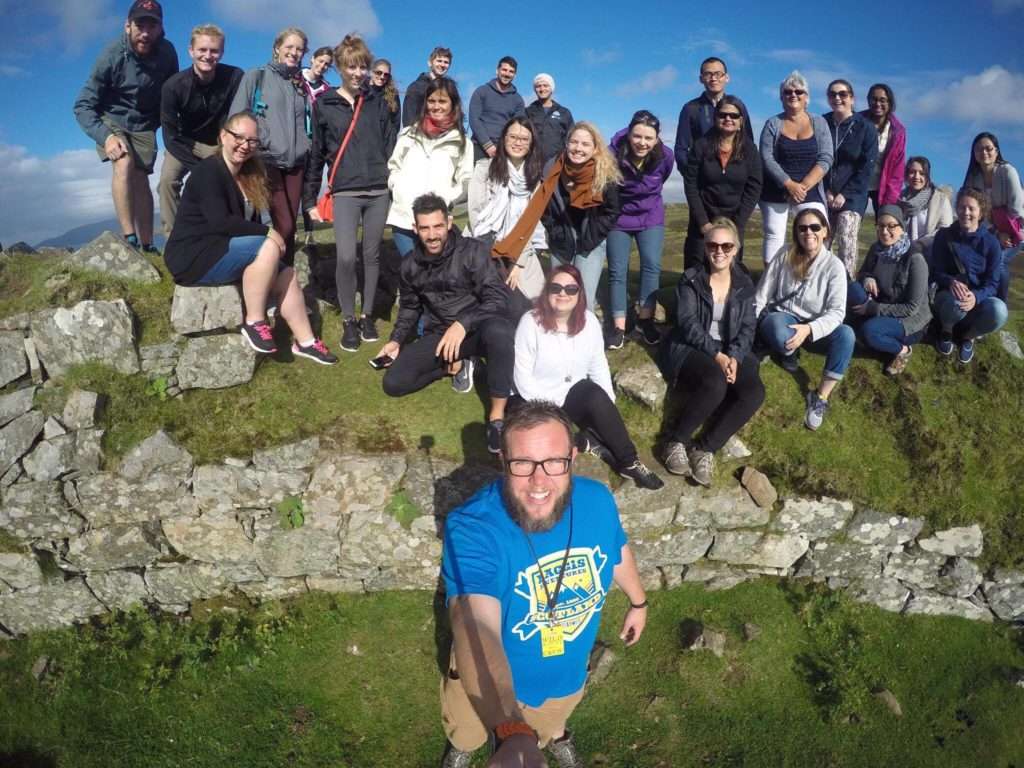 If you were stuck on where you should travel to for your big trip next year, I can’t recommend this trip enough! You can have great experiences no matter what time you go to Scotland, but the weather and cultural events that you’ll find in August makes it hands down the best time to go.

[Pro Tip: Because August draws the most visitors out of the entire year, make sure to book early.]

Explore the Highlands or stay in Edinburgh to experience all that the festivals have to offer, but either way, you will not be disappointed. I will definitely be traveling back to Scotland in the future. Make sure to check out my GoPro edit from my trip below!

If you’ve been to Scotland during the summer months and have any recommendations for things to see and do, feel free to leave a comment in the section below!

Stay Wild and Adventure on!